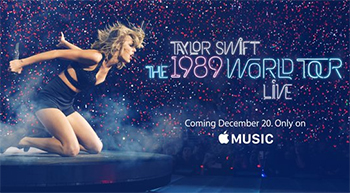 (Hypebot) – It's not proven yet whether exclusives on music streaming services drive lasting subscriber growth or just upset locked out fans. But that hasn't stopped every major player from fighting and often writing big checks to land them.


Tidal, which builds its marketing around exclusive content, scored a big win this weekend when Prince dropped a surprise album on the site. Only Tidal paying subscribers can stream Prince's "HITNRUN PHASE ONE & TWO," though anyone can purchase an album download of it there.


Apple Music scored an even bigger coup with the announcement that it would be the exclusive home of the concert video of Taylor Swifts hugely popular 1989 tour. Swift posted the announcement on her site:


“Beginning Sunday, December 20, The 1989 World Tour LIVE will be available in its entirety exclusively to Apple Music members around the world at applemusic.com/Taylorswift and can be enjoyed across devices including iPhone, iPad, iPod touch, Mac, PC and Apple TV. Fans who don’t already have an active Apple Music account can visit apple.com/music to sign up for a three month free trial today. Plus, Apple Music is the only place where fans can stream Taylor Swift’s full catalog of albums and songs including the Grammy nominated Album of the Year, 1989.”


Initially at least, its a big marketing win to Apple, who had suffered a scolding from Swift over its initial plans not to pay artists for music streamed during free trials. A big check helped win Swift over and led to the concert video exclusive along with a coming Swift driven Apple Music marketing campaign, according to re/code.