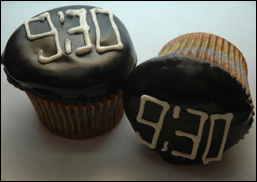 This weekend’s attendees at both sold-out performances by the pop band Cake will get more than they bargained for. For the first time in its 29-year history, the most-attended nightclub in the world, the 9:30 Club, is introducing a 9:30 signature cupcake and each Cake fan will get to be a cupcake fan, free. Everyone entering the 9:30 Club Saturday or Sunday night will get a coupon for one free cupcake. There will be hundreds of cupcakes on hand, so the coupon can be redeemed then and there or at any show through August 31, 2009.

But this isn’t your mom’s cupcake. It’s a custom-developed extravagance specially designed for the 9:30 Club by one of the Washington area’s most lauded executive pastry chefs, Josh Short. Beginning May 30th, the 9:30 Club will expand its 50-item menu to include this sweet indulgence, but the planning for its club appearance began nearly a year ago.

We started working on this cupcake about a year ago, and have been taste-testing ever since, said 9:30 Club owner Seth Hurwitz. I’ve had to double my exercise but, as anyone will see after they taste one, it was worth it. We had to have the best one. Our goal was nothing short of becoming famous for cupcakes and, oh yes, you can see a band while you eat one.

After this weekend’s Let Them Eat Cupcake giveaway, the 9:30 Club Specialty Cupcake can be purchased at each show at the food area downstairs and coffee bar upstairs.

The baked artistry is that of Josh Short, the executive pastry chef of Buzz in Alexandria, Va. who is also the creative force behind all of the desserts at Neighborhood Restaurant Group’s other eateries, which include Rustico, Tallula, EatBar, Vermilion and Evening Star Café This cupcake is one-of-a kind. I created it specially for the 9:30 Club, but it’s so phenomenal, we will add it to Buzz’s offerings next month complete with the 9:30 logo.

The cupcakes will be delivered fresh daily, with quantities limited to ensure no leftovers. "Like everything else we do, we aim for sell-outs, said Hurwitz. As we will never sell day-olds, we have to under-order every show. We expect this will create a secondary cupcake market for scalpers. So come early and buy them in advance." –by CelebrityAccess Staff Writers