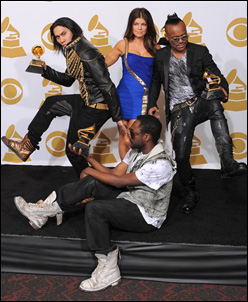 2009 was a monumental year for The Black Eyed Peas, starting with the March release of "Boom Boom Pow" – not only the group's first #1 single on the Billboard Hot 100 but one of the top dozen or so longest-charting singles in Hot 100 history, 12 weeks at the top. They bumped themselves out of #1 with their second single, "I Gotta Feeling" (released in June), surpassing their own success with a 14-week stay at #1 (only the fourth group in Hot 100 history to replace itself at #1). Their 26 consecutive week run at #1 has now become a new all-time benchmark in Hot 100 history (for groups or solo artists).

Meanwhile, flush with three massive hit singles, The E.N.D. (released June 2, 2009) debuted at #1 on the Billboard 200 albums chart with the highest first-week sales of The Black Eyed Peas' career. The E.N.D. has sold over 5.2 million cds worldwide. The fourth single, "Imma Be" is climbing the charts at Top 40 radio and is top 5 on the iTunes chart.

Ludacris has sold over 20 million albums worldwide with each release being certified platinum or multi-platinum by the RIAA. His upcoming album, Battle of The Sexes, is set to be released March 16, 2010. To date, he has won three Grammy Awards (including Best Rap Album for Release Therapy) and appeared in two Academy Award-winning films. In addition to his creative endeavors and business ventures, Ludacris serves as Chairman and CEO of The Ludacris Foundation, an award-winning non-profit organization dedicated to helping young people achieve their dreams through the encouragement of "Principles of Success."