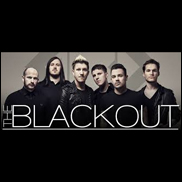 WALES, UK (VIP NEWS) — The Welsh rockers have released a statement in which they say they plan to call it a day, but will be embarking on a final tour in March 2015, with their very last show set for their hometown of Merthyr Tydfil. The band will play five shows on the tour, starting at Birmingham`s Asylum (March 23, 2015), followed by London KOKO (24), Manchester Academy 3 (25) and Glasgow King Tut`s (26), finishing up at Merthyr Tydfil Leisure Centre (28). Tickets go on sale tomorrow (December 3).


Scroll down to read the full statement regarding their split, in which they explain they feel "unable to sustain this band anymore". The Blackout formed in 2003 and released their debut album, `We Are the Dynamite`, in 2007. It was followed by 2009`s `The Best in Town`, 2011`s `Hope` and last year`s `Start The Party`. The post-hardcore band released the `Wolves` EP earlier this year.


The statement reads: "Hey Guys, There’s no point in dancing around the subject, so we’ll cut right to the chase. We regret to announce that Wolves will be the final release by The Blackout. Unfortunately we have come to the conclusion we are unable to sustain this band anymore, and we feel the time is right to bring it to a close. This is the hardest decision we have ever had to make as a band, and although we do it with heavy hearts, we also do with our heads held high. We are all extremely proud of Wolves, and are eternally grateful to each and every one of you who helped it get made. We said that it would not exist without your support, and we honestly mean that."


"We achieved more than we ever dreamed of when we started this band, and we take with us memories, relationships and friends that will last the rest of our lives. We have always said that we’d be nothing without the people who came to the shows, who stood out in the rain, who camped out overnight and we want to thank you, all of you, for making the last ten years so special for us. Whether you came to one show or one hundred, your passion and support has been humbling and life changing."


"We play our farewell shows in March 2015, these will be the last shows we will play as a band. Unfortunately, these shows will only be in the UK. There are no plans for anything more for The Blackout, so we hope you would like to come and party with us for the final time. Once again, thank you for helping us live out our dreams. Love The Blackout." –According to NME.com