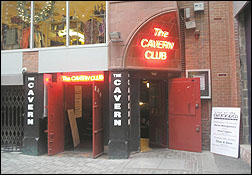 LIVERPOOL (CelebrityAccess MediaWire) — Legendary Liverpool venue The Cavern Club is planning to mark its 50th anniversary with a series of concerts leading up to a "massive gig" in May, a DVD, a book, a TV documentary and a compilation album featuring some of the bands which have played at the storied club.

The Cavern Club is located on Mathew Street in Liverpool. First opened on January 16, 1957, the club, then owned by Alan Sytner, was intended to be a nod to cellar jazz clubs found along the left bank of the Seine in Paris. Although Jazz was the main focus originally, the club started to attract more 'skiffie' and blues groups. Sytner sold the club in '59 to Ray McFall who held the first 'Beat' night on May 25, 1960 which coincidentally featured a performance by Rory Storm and the Hurricanes (which included Ringo Starr as drummer).

The Beatles first played the club in 1961 and made an additional 291 appearances at the club before moving on, being replaced by The Hollies. Some of the other groups that made the scene during this period were The Rolling Stones, The Yardbirds, The Kinks, Elton John, The Who and John Lee Hooker. Finally, in 1973, the club was knocked down to make way for the Merseyrail underground rail loop.

A decade later, the club was rebuilt and re-opened next door to the original site by Liverpool footballer Tommy Smith. Smith kept the design as similar as possible to the original club, and some of the same bricks were even used. The club remained open until 1989, when it shuttered for 18 months before being reopened, this time by former schoolteacher Bill Heckle and a cab driver named Dave Jones.

The revived club is a popular live music venue in the Liverpool scene and is a popular destination for bands from far and wide.

January 16th, 2007 will mark the date of the 50th anniversary and the club is planning a special, invitation-only 13 hour party with a full lineup featuring over 30 bands to commemorate the day. More details about the upcoming concerts will be announced soon as well. "We’re currently negotiating with some of the biggest names to appear at a massive gig that we’ve got planned for May – but it’s one of those that if we give out a whiff of information beforehand they will pull the plug on us,” said Cavern director Bill Heckle in an interview with the Liverpool Daily Post. – CelebrityAccess Staff Writers