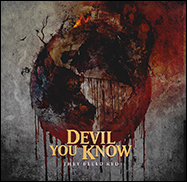 LOS ANGELES (CelebrityAccess) — Metalcore band Devil You Know announced that their split with drummer John Sankey has become permanent, with Sankey focusing full time on the launch of the Legion Festival in Australia.

The band, led by former Killswitch Engage frontman Howard Jones, launched a tour in March without Sankey while he concentrated on pulling the inaugural year of his festival together.

Now, in a post on their Facebook page the band wrote: "We have decided to part ways with John Sankey and will be back on the road this fall. We are not taking any unsolicited drummer audition videos. Big news in the coming weeks!"

“With imminent major announcements coming in the near future I simply no longer have the time to commit to both projects,” Sankey in a statement provided to Australian music news source TheMusic.

“I'm extremely proud of being a founding member of Devil You Know and will always respect what we have achieved, it's been an awesome ride and I wish Hojo, Fran and Womby nothing but the best as they continue to kick ass into the future.”

In Sankey's absence, the group had former DevilDriver drummer John Boeklin and then Nick Augusto of Trivium, who may be a permanent addition.