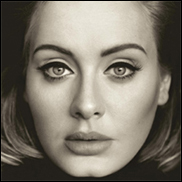 This is not a victory for the rank and file.


The artists railing against streaming applaud Adele's success after keeping "25" from Spotify, et al…they just don't know it's the last gasp of a dying paradigm and the birth of a new one. That's right, you won't see albums released in the fourth quarter for sales impact anymore, but we will see the most popular acts dominate the chart.


Hope. That's what people want. And if Adele can play by the old rules and win, by golly, so can I! But this is untrue. Not only is Adele a phenomenon, she and her superstar brethren are hoovering up all the profits in music. It's no different from Apple winning in mobile handsets, she's an iPhone and you're HTC or Microsoft or Sony or one of the manufacturers who've left the business.

How did it come to this?


First and foremost, mindshare. It's nearly impossible to get in today's cluttered, cacophonous society. Used to be you got on radio and then MTV and you reached everybody. Now, except for Adele herself, no one can do this. Quick, sing a 1D song! You can't, but they just won big on the AMAs. And you can pooh-pooh that awards show, or you can just admit that music has changed. It's not that you're old, it's just that the biggest acts are niche and if you're not one of them, god help you in making a living.


Even radio… There's pop and everything else. Quick, what's number one on the Active Rock chart? You probably can't even name one of the tracks in the top ten!


And the popular squeezes out the less popular and you end up holding the bag, and there's nothing in it, only shattered dreams.

Same deal in touring, where the real money is. You can't get a good seat at the arena to see the star and you can't get anybody to come see the barely known in the club. Hell, the clubs themselves have given up, the record companies pulled their support and their financials caved. Furthermore, most people are drive-by fans, they're not so passionate that they want to underpay to see you in a small venue coming up, they'd rather wait until you make it and pay through the yin-yang for a good ticket on StubHub. Hell, Sam Smith played arenas, after one hit. You can criticize this career move, say it's too much too soon, but the truth is there was demand.


And the corporations do too. There's endless sponsorship money for household names. And none if you're unrecognizable.


You think Adele holding her album back from streaming services is a victory for you, but the truth is it's only for her. And I'll argue all the hype about her potentially breaking sales records is more important than the sales themselves. They give her the imprimatur of importance. And people love a horse race. For a while anyway. Come on, what was the name of that horse which just won the Triple Crown?


That's how fast it all moves. And to have staying power is incredibly difficult. Do I think "25" will have staying power? Probably. Maybe, just like Taylor Swift, when Adele goes on the road there will be continued press.


But there may not be.


This is where we're now at. People love statistics more than the underlying art. And it's not only in music… We want to know how much money "Star Wars" is gonna make, and if your flick doesn't break six digits it's irrelevant.


The key is to have self-respect and do it your way. Know that you cannot win at their game. You're a pawn, if you're on the board at all. A true artist doesn't complain, he or she creates. But why should we expect any different where accumulating friends and likes on social media is the main game?


And if Adele breaks the sales record… Quick, how many copies did "Sgt. Pepper" sell? And "Back In Black"? Nobody knows, not even the bands themselves, who were accounted to poorly. But that music has maintained a hold on the public consciousness, unlike "No Strings Attached."

Have some perspective people. We're witnessing the Super Bowl of Music. And there's only room for one act. And it may be a fun movie to watch, but you're not on the field.


And what's worse, in music today, all the acts that should be retired are still playing. Not only are they on the road, their music is up front and center online, which is testimony to their greatness.


So when you sit at home and see Adele's sales success as a victory for the little guy, a poke in the eye to streaming services, you're delusional.


Yes, she made all that money. It's just funny that she left all that cash on the table the last time around.


As for doing it her way, we all know the rich and powerful write their own rules, that they live in a rarefied air that we don't have access to.


So put your music on streaming services, which not only dominate today, but will kill sales like the aforementioned iPhone killed the BlackBerry.


And know that the big wheel of progress keeps turning. All those acts that stayed off of iTunes are on there now. And it will be true of Spotify and the rest. This is a moment in time. One which will be noted endlessly in the future, how Adele set a sales record in a dying era.


But she's not an athlete, this is not about numbers, but music.