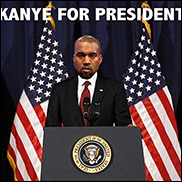 
Kanye West is playing the media like a fiddle.


You're sitting at home scratching your head. How does a guy without a hit record sell out Madison Square Garden for a fashion show?


The media made him hot, it reports on everything Kanye does. And like Donald Trump, he says the unthinkable, he boasts about his greatness and being squeezed out of fashion's inner circle and the public eats up every word, because people need heroes and they ain't gonna be Anna Wintour and the rest of the ice cold icons, but a guy like them, who came up from the deep.


It's about clicks, readers, ads. Media needs eyeballs to succeed. Reporters love Kanye West. It's got nothing to do with credibility or art, it's about story.

Just like Taylor Swift. My insider brethren puked when Taylor gave fans Christmas presents. At least do it anonymously, don't record it, don't go for the victory lap. But this wasn't about doing a solid for her fans so much as keeping her name in the news. And the media reported it and the public bought it.


That's the game. And it keeps changing. Right now social media is king.


But it's all a manipulation. If you feel duped, you should. Controversy sells. And the stars you admire are oftentimes not the geniuses, but the people behind them.

Now they couldn't make a show like this in the U.S. Because we're so busy lauding the players that they overwhelm the message. Story is secondary to special effects. Tom Wolfe's "Right Stuff" made Chuck Yeager a star, but that wasn't the point, that's what the press took out of it. They needed someone to champion.


Are we gonna champion you?


"But the things that last are worth having lies told about in the first place."


So Pete Townshend says his band sucks, he slags others as pretentious. Spontaneous outburst? No, done upon the instruction of his manager Chris Stamp, who saw that a little controversy would aid the band.


You've got to have the chops. But that's not enough, certainly not today, where there are so many messages, where you're competing not only against the pros but the amateurs.


That's right, I know who he is, I tried to watch one of his videos, I was bored to tears. It's a blip on the radar screen, it's not forever, but YouTube has to show someone is making money other than them and it's a good headline, especially for people who don't care. Guy playing video games online makes millions? That's INTERESTING!


We know that Justin Bieber was discovered on YouTube because we've heard the story over and over and over again. The press doesn't want to print the usual suspect story, how an act is a label priority, the songs were written by Max Martin and every promotion man is on the case. No, they're looking for something that will titillate the audience, who cares if it's true!


Ozzy Osbourne biting off the head of a bat…

Van Halen and the brown M&M's…


Do you think these were major news events that the AP couldn't help but spread on the wire?


No, they were manipulations foisted upon you by the handlers and the press so you'd pay attention. They're good stories, nothing more.


Not that Ozzy and Van Halen and Jimi Hendrix are not good.


It's just that they needed a bit of a push.


The press turned on Taylor Swift, saying she a dating nightmare, a stalker out for revenge. Did she get up in arms, did she sue? No, she gave access, she embraced her enemies, she made them complicit in the game, she gave them what they want…more eyeballs.


You're competing against everybody. Your video on YouTube is up against the finger-puller, the sports stunt, the wannabe musician. Used to be you had to get signed to a label to play, and if you weren't on the radio, good luck. Now, if you're not down in the pit with the great unwashed you're not gonna survive.


And sure, you risk overexposure…


But it's one thing to satiate your fans, it's another to piss people off.


And how many people knew who Meek Mill was before he started attacking Drake?

Forget the hogwash about the music business revolution, the one wherein the established players are toppled by the wannabes with new tools. That's just a canard sold to you by people who get rich giving you hope. Whereas you can't even get access to those truly in power. And those in the driver's seat are skilled, with relationships. Now, more than ever, we hear great songs that go nowhere, because there's no buzz, no story, no one pushing the button putting the player up front and center. For a moment there you could zoom to the top via spontaneous virality, but that disappeared with the aughts.


Competition is stronger than ever.

And the reason you know about certain acts and not others is because those acts employ professionals to get the story out and the media repeats it. And this is not sending a bio, don't even bother. Can the MP3. Better to have a riot at your show. Or to sing about sex with Taylor Swift, which Kanye did.


And isn't it funny that it wasn't Beyoncé’s fans trumpeting her Super Bowl performance, but the right wing media who were offended, who bought right into the story, that she was a revolutionary who was anti-police.


No, she's just another pop star trying to make a living.