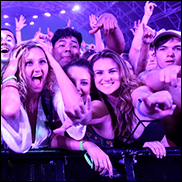 You go to see the people not the bands.


Welcome to the twenty first century, wherein concert promoters are sick of giving all the money to the bands so they've established their own brands, i.e. the festival…Coachella, Lollapalooza, Bonnaroo, Outside Lands, ACL…


Does it matter who plays?


Not really. It's a matter of trust, as Billy Joel would say (is he going to headline next year?) The concertgoer trusts the promoter won't cheap out and will book the best talent available. And the promoter trusts that the concertgoer will pay a lot of money to not only enter, but survive, on food, water, tchotchkes…


It used to be different. Way different. The concert promoter made the lion's share. But then Peter Grant realized every Led Zeppelin concert would sell out, without any advertising or promotion, so why should the promoter take such a healthy fee?


Which evolved into the Jimmy Buffett deal, wherein Mr. Margaritaville got more than 100% of the ticket gross, because the promoter would make so much money on alcohol.


But they came to see Jimmy. No one cared who promoted the show. Jimmy was the attraction.

But Coachella is the attraction, it supersedes the bands, which is why Goldenvoice/AEG is having such a healthy payday.


Not that the bands aren't either. But once you pay them seven figures, once you give them more than they get at a private, once you tell them you can live without them, there's only so much you can charge.


But every year you need new headliners.

But the headliners can't come back, not for quite a while. Whereas a superstar band can tour all year, or every summer, like Dave Matthews. But Coachella is bigger than any one band.


And what do you get when you attend?


A smattering of music, both new and old, you can sample the smorgasbord and talk like an expert for months, if not the entire year. You've seen the up and coming acts, as well as the superstars.


But even more, you've seen your brethren.


Coachella is a rite of passage for Southern California teens. If their parents saw what they were wearing on the polo grounds, they'd rescind their driving privileges, maybe even take back their mobiles. Coachella is where you go to be free. Movies are only a couple of hours, Coachella is a whole WEEKEND!


And you see your friends. And meet new people. And today you can stay in touch, with modern communications techniques, with social media.


Oldsters go to show they're still hip. Or that they're better than everybody else. That's what the VIP experience is all about. It's not really VIP, the real VIP is backstage, but few get that. Still, VIPs are in a walled garden with better food and they can feel good about themselves, the same way they do when they buy a Mercedes or a $17,000 Apple Watch. And did you ever hear someone with VIP access who didn't tell you they had it? No, only a true insider is humble that way.

And we live in the Me Century. Everybody's not only building a shrine to themselves on social media, they're dunning you to pay attention. Do you really think they're gonna care that much about the bands? Hell, the main attraction at Coachella is the Sahara Tent, where you bump bodies and dance, where the DJ is just the grease. It's about letting your flag fly, not your freak flag, that's so sixties, but your fashion flag, how you dress and accessorize is key at Coachella.


And Lollapalooza, and Bonnaroo and…


This is a big change. The concert promoter is no longer at the ass end of the business, feeding off the efforts of the record label, rather the promoter owns an ASSET! Which will drive up your stock price, or get you a good payday if you sell. Isn't that how ACL got such a good deal from Live Nation? And Electric Daisy too?


And at first Coachella was a financial dud.


Because it takes time to grow a festival. The bands come and go, but the festival brands endure, everybody wants to be Glastonbury.


And now we're in the heyday of festivals. Kind of the classic rock era of festivals. Where everybody wants to go, where many are launching and a surprising number are profitable. And the same bands appear everywhere, proving that it's about the festival, not the acts.


Not that this is a bad thing.


But when you read about the performances at Coachella… Know that you're not getting the real story. That's not what's truly happening. The reviewers are deep up their butts. They're believers. Whereas the attendees are constantly moving, constantly checking each other out, knowing that acts come and go, but Coachella is FOREVER!