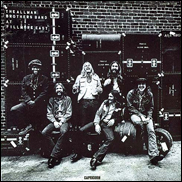 "Wake up mama, turn your lamp down low"…


If you went to college in the early seventies, you know these words by heart. It's Gregg Allman's opening line from the finest concert album of all time, "Live At Fillmore East". And last night, the band performed that album from start to finish, I'd say note for note, but the Allmans are known for nothing if not improvisation.


The dressing rooms at the Beacon are stacked.


We started on top with Derek and Butch. Trucks that is. Derek had Duane's Gold Top around his neck, in honor of the night's festivities. Butch told us the vagaries of running Moogis, the inability of some fans to even remember their own e-mail addresses, and then Warren Haynes strode in next door. Like this was a job. Right from the street to the stage.

And after a peek in on Gregg we took our seats.


Well, first we admired the edifice. In an era where everybody's cutting corners Jim Dolan spared no expense. He refurbished the place into a palace. You feel that someone actually respects music. And the vibe resembled nothing so much as that venue in the East Village, that heart of rock and roll that's no longer beating but was the epicenter of the scene forty years ago, the Fillmore East.


And the fans are milling, and ultimately sitting, then the band hits the stage and breaks into those opening notes and when Gregg starts to sing EVERYBODY SINGS ALONG! It was like we were in church. A church you needed a secret password to enter, one that didn't exclude people, but just required them to be in the know.


The band really locked in on "Elizabeth Reed". Noted as "Liz Reed" on the set list. You remember the story, right? Of how it was a headstone in a graveyard down south? And as the twin guitarists waxed and wailed something was clear, we were listening to MUSIC! To paraphrase Robert Plant, YOU REMEMBER MUSIC, right?


Robert spoke of laughter. And I didn't hear any ha-ha's, but everyone had a smile on their face, because of the experience.


There's been all this b.s. written that the Grateful Dead broke big because they let people tape, that they were fan-friendly. No, the real reason the Dead were gigantic was the MUSIC!

They were always good, but when they finally got their act down on wax, with "Workingman's Dead" and "American Beauty", the masses clued in and there was no stopping the juggernaut of an act that was about PLAYING!


You wonder why this business is in the crapper? It's not about playing anymore, it's not about music, it's about SHOW! As in SHOW BUSINESS! And if you focus first on business, the gig has got no SOUL! And without soul, you ain't got nothin'.


It's not about hearing the hit. It wasn't until '73 that the Allmans even had a hit. But they were legendary and selling out stadiums before that. Because of the MUSIC! You went with your buddies, got stoned and melted with the sound.


The Allmans were tighter than the Dead. And Gregg could sing better. Which may be why they were bigger. But the Dead had a warm vibe, Jerry had charisma, whereas the Allmans were all about the work. They hit no wrong notes, they were a freight train that came roaring through town, you ran down to the tracks, you didn't want to miss it.


"People can you feel it, love is everywhere"


I got turned on to the Allmans in Dave McCormick's dorm room at Middlebury College. Dave played three records over and over again. "Layla", "In Search Of The Lost Chord" and "Idlewild South". We'd roll a doobie, before that band broke big and we even called it that, turn out the lights and watch the zilch drip flame into a bucket of water, energized by the music.


You've got to know, at this point "Midnight Rider" wasn't even a staple! No one knew it. We discovered it as part of the album. As the third track on the first side.


But as much as we loved "Idlewild South", we were not prepared for "Fillmore East". Which came after the venue was closed by the soon to be legendary southern rock band. Bill Graham knew what we did not. Outsiders were surprised that this yet to break act closed the hall, but Bill was right.


And eventually I went back to the beginning, I bought the debut, with the killer version of "Trouble No More", which the band played last night.


But the track I needed to experience, and filling the whole fourth side it was an experience, was "Whipping Post".


All these years later the story of abandonment made sense in a way it did not back at Middlebury. But the sound had been updated too. Derek wasn't just channeling Duane, he was adding his own spin.

And eventually David Hidalgo of Los Lobos came out to wail too.


And when the band settled into the drum solo it became painfully clear…this show was gonna end.


But the experience wasn't over. This was show 191, by time they're done later this month it will be 201 sold out shows at the Beacon, there's a plaque backstage, with rolling digits counting the gigs.


And it's best at the Beacon.


But it's good everywhere.


This is how it used to be. People didn't want to be stars, they wanted to be musicians. They practiced and gigged and practiced and ultimately got good enough to gain acclaim. They got record deals and lost them, they drove in vans with bald tires, but when that engine was finally tuned, and all eight cylinders were humming, the sound was undeniable. People came from far and wide to bask in the music, to partake in the elixir.


No one was fake. There were no hard drives, no auto-tune. You had to be able to sing and play.


And these cats did it so well that money started raining down upon them in prodigious amounts. I remember that picture in "Rolling Stone" with all the Allmans' guitars belted into the airplane seat. Yup, the axes had their own ticket, they were just that important, the band didn't want to give United a chance to break their guitars.


And there was booze and drugs, more women than anyone but Gene Simmons, who came after, could remember. It was pure.


You want to know how we know?


Because most of the acts from back then are broke. They've still got to work to survive. Tickets were under five bucks. Record royalties were miniscule. It was primarily about the lifestyle.


And the audience was an integral part of that lifestyle. Without the audience you had nothing. It wasn't about perfecting the sound on record so much as plugging in on stage and giving it your all, feeding off those in attendance, trying to blow the roof off the joint.

There are no short cuts.


You can make a record with Dr. Luke, but that doesn't mean anybody wants to see you live.


You can win "American Idol" and be famous, but so is Snooki, and she can't sing, she's got no talent whatsoever.


Don't confuse fame with talent. Talent is honed. Over years. When no one is looking. When your parents tell you to go to school and your girlfriend tells you you're a loser. Nobody believes in you but yourself. But your belief is so strong that you can't give up. Then people you never knew suddenly believe you're God.


I'd like to tell you there's a star in the Allman Brothers Band, but that would be wrong. Every player on stage is an integral part. It's not about preening, but playing.


And it's about playing once again. There's a host of acts most people have never heard of selling out clubs and theatres to dedicated fans who go to every gig, which they can afford to because tickets are so cheap.


This is our only way out.


Last night the Allman Brothers tied me to the whipping post.


And it felt so GOOD!