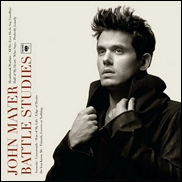 I woke up with a song in my head.

I went hiking last night long after dark, the moon was almost full and the breeze was warm. I was planning to play Don Henley's "End Of The Innocence", it seemed fitting after finishing the Franzen book, but my iPod was on "Half Of My Heart".

I was overhyped on John Mayer. By his label, by independent retailers. And when I actually heard the wimpy music he released I laughed, and winced when he was overexposed in the media.

His mixer kept telling me he was going to do a guitar record, that he was truly a slinger, but only after another wimpy album. There's nothing that bugs me more than playing the game, than denying who you really are in order to ensure commercial success.

And then, after hearing about bodies being wonderlands and daughters I was subjected to this same guy wincing as he squeezed out notes a la Clapton. I wasn't buying it.

Then I discovered "Who Says". It had the feel of those Stephen Stills tracks, like "4+20" and "See The Changes", yet with a slightly whimsical Paul Simon vibe rather than the soul-baring of Stills. I couldn't stop listening to it. This was not fake, but one guy on his guitar telling his tale about independence, about freedom, about the passing of time.


But I didn't become a fan, one track is not enough.


I was at a dinner last week and someone remarked how John Mayer was ill-adjusted. He'd locked himself up in his room for years learning to play the guitar, did we expect him to be an expert on human relations? Yes, John Mayer blew himself up telling the public Jessica Simpson was sexual napalm and employing the "N" word. Can he recover? I'm stunned that so many women tell me they're now off him. His road business has suffered. Maybe it's just about time for me to become a fan.


Only someone who's listened to a ton of Beatles records, someone who's studied history more than his image in the mirror, can employ a bridge like John does in "Half Of My Heart". It all comes down to the songs. And in order to write and play them you've got to practice, which almost no one wants to do. I could tell this track was not made by committee, that there was a bit of Mayer's soul encased inside, and that's what turns me on, you can miss a lot, but if you hit the bulls-eye now and again, I'm on your team.

So I decided to load "Battle Studies" into iTunes, transfer it to my iPod.


And at first, I didn't discover anything new, I didn't get hooked, the take of "Crossroads" was less than superfluous, why it made the album flummoxed me. Then again, John said "Battle Studies" wasn't as good as "Continuum", maybe the record was just substandard.


But needing to hear "Half Of My Heart" again, and again, I found my iPod slipping into other tracks, and in the process, I discovered "Heartbreak Warfare".


In retrospect, now that I know it's the opening cut, which isn't always so obvious when you're listening on shuffle on your iPod, it fits that role perfectly. Today, most people make the single first, hell, is anybody gonna listen beyond that? But really, the opening song should be a statement, an introduction and an explanation as to where you're going.


And "Heartbreak Warfare" tells us this is John Mayer's break-up album. I didn't get that before, in all the online hype, all the dumping of girlfriends, I lumped Mayer in with the rappers, who kick their exes to the curb as opposed to vice versa…but the opposite is always more interesting.


How do you feel the pain, not deny it, yet soldier on?


You know those people who break up and tell you they're one hundred percent, they've instantly recovered? I figure they're not in touch with their feelings, they're heading for a fall. Being apart after being together is so hard…one of the hardest things we have to do as human beings.


And "Heartbreak Warfare" starts like there are bombs dropping in the background, like the song was cut in the middle of battle. You've seen enough war pictures, the sky is lit up, but you've got to soldier on…that's what the song sounds like, with a driving beat propelling it forward. And once this underlying beat penetrates your body, you can't help but march along, play this song over and over and over again.


No one ever really wins in heartbreak warfare. Maybe one person has decided to get out first, but it's painful to leave. As far as inflicting pain intentionally after the fact…that's not my style, but I know that paradigm exists. I'm more of a wound-licker. Then again, no one likes to see their ex with someone new.


And I'm not sitting here saying "Heartbreak Warfare" is a single. It's truly an album cut. Something to be played at home, alone, savored. Those are the cuts we love the best, the ones that we can own, that are not possessed by the collective consciousness.


Used to be we watched our artists, waiting for them to grow to greatness, to the point where we should pay attention. Now we can barely afford the time to pay attention to what we love, the rest eludes us. But if you continue to work, know it's about a career, not a hit, and build a body of work, you never know when someone's gonna stumble on your catalog and become enchanted, become a fan.


The album cycle is done. Mayer's off tour.

But my fandom is just beginning.