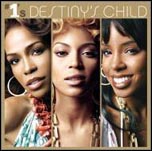 Just for the record, what format were these 16 tracks number 1 on? The fantasy chart of Charlie Walk?

This is a piss-poor number for an act trumpeted as the biggest selling female group of all time. Between this farce and Mariah Carey's statistics real acts like Billie Holiday and Janis Joplin are rolling over in their graves and telling Joni Mitchell the news.

Despite the overhype, I'd expect Beyonce's solo career to follow the arc of Whitney Houston's. As in, one day everybody will look at each other, wonder what they ever saw in her, and her sales will take a dive.

As for this being a catalog item… God, if you can only sell 100,000 records in one week most people have ALREADY forgotten you!

2. Nickelback "All The Right Reasons"
Roadrunner

I guess their fans couldn't find ENOUGH reasons to buy the same damn album for the third time.

And herein we have the power of brand names. Rod's audience is SO old and SO out of it that they'll buy ANYTHING with his name on it. As long as it doesn't disrupt their cocktail parties.

Meanwhile, I heard Rod's cover of Carole King's "So Far Away" on XM today and it reminded me of how good this guy COULD be. Not that he's interested in being good anymore, he's just interested in continuing to be rich and famous. Another great ad for rock stars dying young before they tarnish their images. Really, listen to "Gasoline Alley". It's a REVELATION!

Are these really the shitty lyrics that are getting played? Is this really what's hip? I almost threw up hearing this song on the radio, and just threw up in my mouth reading the lyrics. Almost as disgusting as music today, huh?

My Humps
by Black Eyed Peas

I drive these scrubbers crazy,
I do it on the daily,
They treat me really nicely,
They buy me all these ice-ys.
Dolce & Gabbana,
Fendi and then Donna
Karan, they be sharin'
All their money got me wearin'
Fly gearrr but I ain't askin,
They say they love my ass 'n,
Se7en Jeans, True Religion,
I say no, but they keep givin'
So I keep on takin'
And no I ain't fakin'
We can keep on datin'
I keep on demonstrating.

They say I'm really sexy,
The boys they wanna sex me.
They always standing next to me,
Always dancing next to me,
Tryin' a feel my hump, hump.
Lookin' at my lump, lump.
U can look but you can't touch it,
If u touch it I'ma start some drama,
You don't want no drama,
No, no drama, no, no, no, no drama
So don't pull on my hand boy,
You ain't my man, boy,
I'm just tryn'a dance boy,
And move my hump.

6. Ashlee Simpson "I Am Me"
Geffen

Somewhere John Kalodner is rolling over in his grave. Oops, JK/JK's not dead yet? Well, I guess rock music is.

Some ex-Geffen employee should stand up like the Nazi in "The Producers" and say THIS ISN'T GEFFEN RECORDS! GEFFEN PUT OUT RECORDS WITH CREDIBILITY!

Enough of the media spin. She's over. Screw that first week number. That's just idiot prepubescent girls who didn't get the memo yet. Ashlee's TOAST! (Unless, of course, Jordan wants to spend a ton of money to jam one of these tracks down our throats just to prove he's still a genius.)

Did anybody tell Stevie that this was Prince's act? Using numbers for words?

What if a superstar put out an album and nobody cared…

God, Stevie would have been better off hooking up with Clive Davis and singing HIS version of the Great American Songbook! Cross-promoting it at Starbucks.

This is what happens when you've got nothing left to prove. You think of the audience and deliver what you think people want instead of something that they've got NO CLUE that they want which they embrace upon hearing, like "Talking Book".

Stevie Wonder was the Pixar of his day. He put out three PHENOMENAL albums in a row. FIVE if you want to include "Music Of My Mind" and "Songs In The Key Of Life".

Does this mean Sylvia Rhone loses her job?

The Tour de France, the marriage, all of the ink, all of the hype couldn't sell this record.

I'd say you can't sell a record like this. The system isn't BUILT for a Sheryl Crow. It wants HITS, not meaning.

Instead of playing the game Sheryl should have used her position as the most well-known and credible female rocker to rail against the system. She should have given away MP3s of the songs on her Website. Gotten creaky baby boomers to sign up to be her street team, offering cycling lessons with Lance as a reward. But rather than confront the reality of the situation head-on, Sheryl is just sheepishly playing along. To seemingly no effect.

Bono could take a lesson from Depeche Mode. That it's all about your base. That to play to the casual fan is only to ALIENATE your base. All that marketing, the iPod, "Entourage", it didn't sell many more records of an act that can't get on Top Forty radio ANYWAY! And, the gigs were sold out, so WHO CARES?

And Depeche Mode sells out. INSTANTLY!

Go to a Depeche Mode gig and you won't see casual punters coming in late talking on their cell phones just to be able to tell all their co-workers they were there. Rather, you'll be confronted with fans and fans only. Having an experience OUTSIDE THE SYSTEM! Experiencing what they consider to be the Holy Grail. I don't know about you, but I don't want to pray with non-believers. Depeche Mode is on a tour of religion. If you don't believe, SCREW YOU!

Isn't it fascinating that Irving Azoff and Howard Kaufman are partners. Because they've got COMPLETELY DIFFERENT MANAGEMENT PHILOSOPHIES!

Compare Aerosmith to the Stones as much as you want, but be clear, the Boston band is America's number one rock act. How can it be that their tours no longer sell out, that nobody seems to CARE!

Mismanagement. They toured SO often that they burned out the fan base/audience. God, ever study agriculture in fifth grade? You've got to let land lay FALLOW! The Eagles last played Los Angeles on New Year's Eve 2000. And that wasn't even part of a tour. They didn't reappear in California for over FIVE YEARS! Every ticket was sold at an exorbitant price. Absence makes the heart grow fonder.

God, this album should have at least been done in concert with a PBS pledge drive. Couldn't there be some innovative marketing?
This is sad.

Actually, this road has been WELL-TRAVELED!

Bill Clinton killed Melissa Etheridge. She used to be a closeted lesbian who rocked as hard as the boys. She had something to PROVE!

Then she became the poster girl for the Big Tent Democrats.

That's not rock and roll.

I'm sorry she got cancer. But instead of smiling everywhere maybe she could channel her angst and rage into some cutting edge rock and roll instead of cashing in for Christmas with her overplayed "hits".

Ever notice that greatest hits albums no longer matter?

Nothing like a little overexposure to kill an act.

This is what "hit" business will get you.

Expect to see Gretchen at the state fair soon.

I could blame the media for latching on to something and then burning it out, but really I blame the purveyors, for ALLOWING the media to burn something out. That's the mantra of the twenty first century, HOLD BACK! Multiple impressions is so nineties. Retain a shred of dignity. Know that it's about records, not image, at least if you want to last.

In other words, despite the scorched earth publicity campaign, only the hard core care at this point.

40. Franz Ferdinand "You Could Have It So Much Better"
Domino/Epic

It's not the eighties anymore. It's not like the video of an arty U.K. band can get MTV airplay and cross over to hit radio.

Something like this lives and dies on being a hit. And, there's nowhere it can BECOME a hit!

This would be much cooler if it were on a true indie in the States. Then a hard core would believe. Instead, the trendy cool people don't want anything to do with this.

And here we have what's wrong with the record business. The real reason sales are down. Everything sold today has the smell of a turd tomorrow. Not even 20,000 kids want to remember the biggest band of five years ago. They're ASHAMED of it!

It's all about building catalog. Which none of today's companies are doing, they're just selling evanescent hits, EXPENSIVELY!

Furthermore, there's nowhere to HEAR most of what they make, since the mainstream outlets air so little.

But really, it's the customer's fault.

The cognoscenti believe this is the album of the year. Consider yourself warned.

DON'T rail at me for being negative. It's just the early sixties all over again. Trash music waiting to be usurped by real acts.

But today these real acts won't be on the "Laguna Beach" station. And won't be featured on Top Forty radio either. They'll grow from the bottom up. Fans will spread the word. They won't do ANYTHING for a buck.

The major labels are spending too much for too little in return. They've got to reconfigure their business. To be one of singles and doubles by career players.

The only people who care about the above chart are the people on it and "Entertainment Tonight" and the newspapers who print it. Everybody else has tuned out.