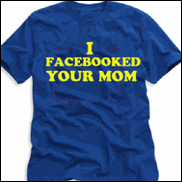 "For me, one of the film's great scenes comes when Mr. Saverin is trying to persuade Mr. Zuckerberg to accept more advertising for Thefacebook. Mr. Zuckerberg won't hear of it. 'I mean it is time for the Web site to generate revenue,' a frustrated Mr. Saverin says in the film.

'Thefacebook is cool,' responds Mr. Zuckerberg. 'If we start installing pop-ups for Mountain Dew, it's not going to… '

The dialogue ends there, but you get the point. Mr. Zuckerberg was exactly right – it was Facebook's coolness that allowed it to overtake MySpace, which had a huge head start but became less cool with every ad it took. I have no idea if that exchange between the two men took place in real life, but it is one of the truest moments in the movie."


That's from Joe Nocera's column about "The Social Network" in yesterday's "New York Times". And that's the essence of what's hurting the mainstream music business, it's just not cool. Focusing on money first, there's no heart, no genuine quality that bonds you to the acts. You know they're being purveyed by money-hungry people. And you might want to go to dinner on their dime, but you don't want to give them your money, not much of it anyway.


Don't confuse this with the hip-hop ethos. It's almost as if the whole country believes it's African-American. The blacks have been second class citizens in the U.S. of A. from time immemorial, literally the beginning. To see a former dope dealer triumph in the entertainment and business spheres made you want to thrust your arm in the air in appreciation. Yes, Jay-Z beat the big boys at their own game, he got his. Same deal with Russell Simmons. Then again, did they win relative to the real big boys, the bankers?


In order to make it and sustain in the music business, it can't be about the money.


I know, I know, this is the last thing you want to hear. But that's why you're never going to make it. If you're going to make it, it's got to be about the obsession, the need to make it. That's what Mr. Nocera points out in his column. Facebook may have been the Winklevoss twins' idea, but they never would have made it successful. They were obsessed with rowing, Mark Zuckerberg was obsessed with coding, with changing the world.


Are you obsessed with music?

And, if you are, do you own the musical equivalent of a Harvard degree? If I mention some obscure band from the seventies, do you know it? You'd be surprised how many successful young musicians do. They know the history of the game. You've got to know where you came from in order to make it today.


A huge desire to be rich and famous might get you a partnership with Dr. Luke and a Top Forty hit, but that success means less than it has in thirty years, and that paradigm is going in the wrong direction, it's going to continue to mean less.


You've got to be good. And cool. And then people will be dying to give you their money. But you've got to look like you're not in it for the money.


Neil Young LOVES money. Just ask anybody who knows him. He charges a fortune to go on the road. He takes no sponsors, but the promoters who buy his tour do. In other words, you can play Staples Center without being sponsored by Staples.


Don't try to convince your audience that you deserve cash. That's a losing proposition. Explain to me how that works again Paul McGuinness? You're rich as hell, you're a tax exile, and you're complaining about Irish copyright laws? Who in hell is going to be on your side, other than other rich people?


Oh, the record labels can rant and rave in the mainstream media, but it gets no traction with the audience. Because the audience is in love with the music, not the labels. And music has gotten better since Napster. It's only the mainstream crap that's gotten worse. Hell, like the Beatles sang, it's getting better all the time!


Once the public is hooked, THEN you charge! Labels can't understand why music should be free first. It's got to be! Because the audience is paying with its time, which is much more valuable than money. And they'll give it, if there are no hidden charges, no gotchas, no caveats.


People can understand if you've got to see Dave Matthews with 20,000 other people, he's just that popular. They'll pay up to a hundred dollars for this. But ask them to pay $1000 to see Dave with 2000 people and they're turned off. Suddenly, it's about Dave making money.

Wow is this complicated.


But only if you're an oldster.


Maybe we had few options in the twentieth century, but there are a PLETHORA of options today!


Facebook was cool. It didn't launch everywhere in a day. You wanted it and couldn't get it. And when you finally got it, it worked flawlessly. The interface was seamless and page refreshes were fast and connecting with everybody you once knew was thrilling. Where's the money in that equation? NOWHERE!


Of course, Facebook is trying to monetize now. But it's even easier in music. You can sell so much stuff when you've made it. Tickets, merchandise, special hopped-up album packages/vinyl. By complaining about theft of recorded music in the advent of your career you're so focused on today that you're missing tomorrow!


Which is why the major labels are doomed. They're not even thinking about a year from now. Imagine if Facebook whored itself out to everybody who wanted to make a deal today. The site would be laden with ads, would make a fortune for a brief period of time, and in a year, everybody would be gone, on to the next thing.


Rihanna went on the road and did lousy business. Why go? To keep her in the lifestyle we keep reading about on TMZ?


Now, more than ever before, in the information society your every career move is scrutinized. Think before you take that check. Of the cost to your career. You don't want the little money, you want the big money!

Terra Firma is suing Citibank saying it got ripped off in its purchase of EMI. Would Terra Firma be bitching if it bought Facebook for six billion dollars? No, they'd be popping champagne, Guy Hands would return to the mother country in order to be knighted by the Queen. He'd be so rich, he wouldn't worry about the taxes.


Do you want to be that rich?


Then stop thinking about the pennies and start thinking about the c-notes. If you ask a girl to marry you on the first date, she'll deem you a psycho and abandon you, if you dun someone, trying to get them to listen and buy your music moments after you've formed your band, they'll reject you just as quickly.


We live in a whole new world. The acts not making deals with major labels, building their tribes online, servicing them with free live tracks, not suing them but giving them all the tools to spread the word…they're making it, they're the future.


The old guard is the past. No matter how much they protest, they're history. Do you want to go to a prostitute every night or have sex with your spouse? It gets old if there's no love.


There hasn't been any love in the mainstream music business for quite a long time. It's about relationships, not one night stands. It's about music first, money second. It's about the fan, not your pocketbook. And if you think otherwise, you're not gonna make it, you're certainly not going to have a career.
No virus found in this incoming message.