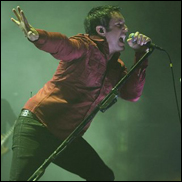 No casual fans were in attendance. Because you couldn't get a
ticket. And why would you want to?


At the juncture of art and commerce, for one slim moment in the
nineties, an act playing less than mainstream music could make a video
so riveting, enhancing the underlying sounds, that MTV could air it
and a career could be jettisoned from nowhere into the stratosphere.

This was prior to Facebook, BlackBerry Messenger. There were pockets
of fans, but MTV blew Nine Inch Nails up. And then Trent and his
roving band of backup musicians blew people's minds. Most notably at
a Woodstock reunion, where turf was thrown and there was a palpable
excitement not seen since the sixties. This was a scene. Which David
Letterman wanted a part of. But Nine Inch Nails never did do his
show. Why? Dave could look hip, but what would it do for the band?

Who'd already reached many more people than they'd originally
anticipated. Who would seem positively small on television. Whereas
their music was so big!

You wouldn't drop the needle on a NIN album at a party, certainly not
a club, unless it was inhabited by misfits, who felt the mainstream
had rejected them. But now, the mainstream barely exists. Instead of
being an outsider, Trent Reznor is a leader, a beacon, telling all in
attendance, all paying attention, to do it your own way.

Imagine being in a relationship where you never had to compromise,
where you were loved for the way you are. A job where you could tell
off the boss. This world doesn't exist, except in art. That's the
privilege of the artist, an ability to create in his own exact
vision. A charge which Trent Reznor embodies, blazing a path in his
own unique direction, willing to make mistakes along the way, worried
not a whit what some overlord might think.

And what results is music made for few. But these few, they adore
him. For expressing all their frustration, for being who they want to
be, uncompromised.

Just before the houselights went down, Tony Hawk came over to say hi
to Jim. Guerinot told me he'd learned tons from working with the
skateboard king. In the music business we sucked at the tit of the
label, we were beholden to the company to both make us and direct us.
Whereas Tony had had to cobble it together himself. Take chances.
Tony was what the music business became. Sure, he ultimately got
lucky with his video game, but its success was not foreseen. Tony's
an artist, not only on four wheels, but in business, willing to take
chances, to do it a different way, only by taking risks can you get a
surprising result.

The audience was not pretty. These were not scenesters. I saw so
much black, you'd think we were at a wake. Which, on one hand, we
were, the final NIN performance. But so many of these people believe
they're at a permanent wake, that the odds are stacked against them,
they look to the music for a release.

And there was tons of music. Three encores and thirty nine songs.

Things started to heat up twelve numbers in. When Mike Garson took
the stage.

Shouldn't it have been Benmont Tench? No, diss to Mr. Heartbreaker,
but when you're in Los Angeles, your special guests are Hollywood
stars, not an avant garde pianist whose one fling with the mainstream
was thirty odd years ago on David Bowie's "Aladdin Sane".

But Mike added a new element. Prior to this, the music had been an
assault. Suddenly, it had texture, mood.

Then came Gary Numan. Yup, the guy with the slick 'do who sang
"Cars". But although a novelty on MTV, a one hit wonder, Mr. Numan
was not in it for the fame, but the sound. Trent considers him to be
a progenitor. Gary, looking little less for wear, not having gone
under the surgeon's knife, but having been hermetically sealed in a
basement, continuing to play music, stood at the mic with authority
and dealt out the lyrics. Then tapped on a keyboard at the front of
the stage. In this world, Les Pauls and synthesizers co-exist.

Encore two was performed with the Dillinger Escape Plan. An act I'd
never heard of, but I'll never forget. A complete band, a NIN
doppelganger, who took the stage with such energy that you could feel
it blasting in your face. The drummer pounded, then they kicked
around his big bass drum, threw it in the air. The guitarist twirled
his guitar around his body, again and again. And the lead singer
jumped into the audience. Rick Mueller said it was the most exciting
act he'd seen all year, Jim said he wanted to see them again. All
I'll say is they got my attention!

The final six song encore was more melodic. It's like after beating
you in the head, taking you on an aural mystery tour, Trent wanted to
soothe you, let you know it was going to be all right, that he'd be
back.

And he will. Or so he said.

So, I believe you'll get another chance to experience mindblowing
staging. Supposedly stripped down, the flashing lights, the strobes,
created an otherworldly atmosphere. Like the sixties, but even
darker. Like the survivors of Altamont regrouped and started making
their own music.

Will you get another chance to hear this band? The drummer who never
let up, who pounded like Keith Moon, albeit harder and slower? Robin
Finck? The bass player who could manipulate a double acoustic in
addition to his electric?

I'm not sure. But whatever concoction he comes up with, we'll be
interested. Because Trent Reznor is a true artist. Testing limits,
doing it his way. Watching him perform, all the executives got small,
retreated in the distance. Although singular, not leading any mass
charge, Trent is doing it for us. Illustrating that you can do it
your way and not only survive, but thrive. I'm not telling you to buy
an album, download a track. I'm just saying when you watch acts
develop in the future and wonder where they got their ideas, look to
people like Trent Reznor and Radiohead. It's not about making music
that sounds like theirs, but coming from the same place. That the art
is king. And that NO ONE is going to tell them what to do!