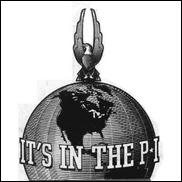 With a stripped down staff, the new "Seattle Post-Intelligencer" will now publish online, and rather than being an amalgam of local and national news, it will focus on the City of Coffee with laser-like focus.

The newspapers may have followed the music business in being blind- sided by the Web, but it appears Hearst has a better plan for survival than the major labels.

In other words, trying to be all things to all people, when your audience has the ability to extract just what it wants online, is a poor strategy. Banking on homogenous acts promoted by radio and TV is a recipe for extinction, not survival. Rather than lowest common
denominator, you're better off serving niches exactly what they want.
If you were to run a record label, you'd be better off with an indie act, an underground rap act and a hard core metal act than the blend of performers with "mass appeal" major labels now sign.

The major labels have not died yet because of their catalogs. That's what's bringing in the revenue, along with their publishing companies. When will some bean-counter look at the costs involved with new music production, take a scalpel and excise this from the company? You're spending all this money and these are the returns?

Furthermore, there's the obvious question whether you need a major label at all. Seth Godin's got an interesting post about this today: http://sethgodin.typepad.com/seths_blog/2009/03/where-have-all-the-agents-gone.html

Does the major label add any value?

It used to, when having relationships with gatekeepers at radio and retail were key. But today, the music of most acts will never get played on terrestrial radio. As for retail? You can make a deal with TuneCore and get paid no problem. In order to survive, all labels must deliver more than manufacturing and shipping, must do more than just issue press releases. A label should provide more degrees of service, but this requires infrastructure, which the label has cut in order to reduce costs. If you want a piece of my merch and my live business, you'd better help sell my merch and get me gigs. But the majors don't do this. So, despite their rhetoric, they're heading towards oblivion. Sure, they've got some acts so blind they'll make this 360 deal, just like there were full page advertisers in both the "Rocky Mountain News" and the "Post-Intelligencer" before they folded. But most acts want more specialized service, and they don't want to give up so much to get so little in return. The same way an advertiser would rather pay Google for those who click on their AdWords than spray their message far and wide for a high price to people, most of whom don't care. The old "Post-Intelligencer", the printed edition, charged the equivalent of $200 to reach a thousand users, the same reach online is $10. And you wonder why advertisers are migrating to the Web?

And what killed newspapers? Craigslist. Now classifieds are free.

Just like music. Most acts are thrilled if someone will listen to their music. They'll give it away for free hoping to make fans. How is the label supposed to
compete with this? Especially when these give-it-away acts see no need for the label?

And when it's all said and done, we're not going to have a bunch of ubiquitous acts, just a ton of journeymen, who are supported by their silo of fans. Sure, if I want to go to Seattle, I might check out the "Post-Intelligencer" site. Otherwise, I'm ignoring it. Just like I'm ignoring Lady GaGa and all those other records in the Hot 100. Sure, there's a chart, but most people are not paying attention. They don't have to. They've been set free by the Web. And to think that they're going to come back and buy a very few acts, that are promoted by the usual suspects, is to live in fantasyland. Top Forty radio is a niche. And not a very attractive one, populated by evanescent acts concocted by svengalis. People want something more visceral, something that they can hold on to and spend a life with. Hit single
acts are like stories in a newspaper. Here today and gone tomorrow.
Who wants yesterday's news?