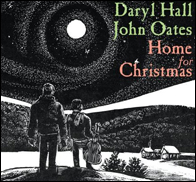 What do they say, all politics are local? It still comes down to who you know. John Oates lives in Aspen. Therefore he gets special treatment. You know the proprietor, he does a solid for you. And since there were only three CDs on the counter, the other two unrecognizable Christmas discs, I’m sure Hall & Oates are selling a bunch. Christmas albums are impulse items. They’ll be the last CDs to evaporate. Hell, you don’t want to download Santa… (Then again, I downloaded "Let It Snow"…)

You’ve got to know Vince, every company he works for is the shit. You should have heard him talk about Best Buy when he worked for their label! Hell, their label might be gone, but Best Buy IS the shit. At least compared to other big box electronics retailers. I wouldn’t go to Circuit City. Dingy. Best Buy is bright, and even though they sell white goods, they’ve got seemingly all the TVs, and reasonable prices. And how fucked up is it that a flat panel is more desirable than a stereo system? God, in the seventies we had multi-thousand dollar stereos and went WITHOUT TVs. We needed to get closer to the sound. We needed to hear what the instruments sounded like. We needed to FEEL the music. You can’t feel the music on what passes for a stereo today, no wonder everybody’s listening on their iPod.

Meanwhile, I thought Vince was bragging about his iPhone, which I won’t buy, because of AT&T, which once again got horrific ratings in "Consumer Reports", but it turned out to it was an iPod Touch. Which contained not only all his music, but pictures…of his baby, of his time in London…

You see Vince works for Getty Images. And, unlike the record sphere, business is BOOMING! It’s about licensing everybody for a little and aggregating the results. Hell, Getty licensed Perez Hilton. Others sue, they made a deal.

Vince will tell you anything, but he wouldn’t tell me about Getty’s moves in music (other than their involvement in Zeppelin’s O2 show). Said he was under a nondisclosure agreement. They bought Pump Audio… This is a company that’s expanding, this is a company to watch.

All the agents are talking shit about LiveNation. Why are they moving their buyers around? Some of the people are good, but they’re unfamiliar with business conditions in their new domains, and they don’t seem to know the developing acts. And do they have to close the sheds because no one can fill them anymore?

Rap on the sheds was most buildings were ugly, bad experiences that people didn’t want to go to. But the real issue seems to be they just can’t be filled, not without papering the house. So, what’s LiveNation’s play now?

Promoters need to break acts. You can’t count on record companies. But too many promoters are used to selling tickets to what the labels built.

Either raise the prices to market value, or figure out a way to get the tickets in the hands of the fans. Hell, they did it for Zeppelin, you can do it for other acts.

But the most fascinating thing is the belief that the secondary market is indomitable, that it’s changed the business forever. Did you see the pictures from the Spice Girls gig in Vegas? The building was HALF FULL! The story’s all over the Web. Wait a minute here, didn’t the promoter talk about a very quick sell-out?

So punters are buying tickets to re-sell. And they’re getting stuck. It’s the dot com/day trader scenario all over again. Superstar tickets will be scalped. But it appears you can get a ticket to ANYTHING these days, so why pay the inflated price on the secondary market? Hell, just go to the show and pick up the tickets for next to nothing! If the promoter himself doesn’t paper the show…

Once again, the demand comes from the music. And most acts fly under the radar these days. No wonder LiveNation’s stock has tanked. What NEXT? Fuck signing Madonna, they’re going to have to BUILD NEW ACTS IN ORDER TO SURVIVE!

Had dinner with Holly, their marketing person (along with a bunch of agents, managers and even G. Scott, who runs the delicious Ryman and Peter Tempkins, who sells insurance for all these gigs).

Something is going on here. You see they allow fans to build demand for gigs. And then bands tour where people want to see them. Better yet, they get sponsors to hold contests, where surfers create demand on a company’s site, and a tour is created based on what markets get the most hits.

Are you in business with Eventful? You should be. They’ll even share sponsorship money, even though you’re dying to be involved and would do it for free.

The labels came to them. They created the service, bands started using it and word spread. This is the modern era. Create something great enough, and the people will come looking for YOU!

Rich Greenfield is at it again, speaking truth to a business that functions like an ostrich.

There were FIFTEEN albums that sold in excess of 100,000 the first week of December last year. This year there were EIGHT! And this trend has held for the last couple of weeks, approximately a fifty percent drop-off. Furthermore, four of the eight selling in excess of 100,000 WEREN’T ON A MAJOR LABEL!

Sales have tanked even worse in the past few weeks than they have the rest of the year. Including digital, they’re off in the mid-teens!

Do people not want the music? Did everybody get an iPod and start STEALING the music? Is it impossible to create demand? Are things so bad that people only care about the acts of yore, like the Eagles and Garth Brooks?