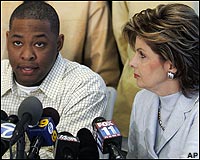 LOS ANGELES (CelebrityAccess MediaWire) — The Michael Richards Apology Tour is finally making a stop where he gets to say he's sorry in person to the people he actually menaced with his racist harangue about inverted forkings.

Comedy club patrons singled out in racist diatribe are 'happy' to meet with comedian Michael Richards.

Court TV is reporting that four black individuals who were the target of comedian Michael Richards' racist rant at a Hollywood comedy club say they are pleased the "Seinfeld" star has agreed to a face-to-face meeting in neutral territory.

"I was very hurt by what happened at the Laugh Factory," Kyle Doss told reporters Friday in a brief statement.

"We are very happy Mr. Richards has agreed to meet with us in front of a retired judge. … We thank him for this positive step he decided to take," Doss said.

He also spoke on behalf of Frank McBride and Patrick McLucas, who stood behind him during a press conference held by their attorney, Gloria Allred.

Allred, who suggested the meeting, said she also represents a fourth individual present at the club — a black woman whose name has not been released and who was not present Friday.

Allred said that a retired judge, agreed upon by both parties, will mediate the sit-down dialogue and then determine whether Richards should take any additional action.

A cash settlement could be part of the resolution, said Richards' spokesman Howard Rubenstein.

"Michael hopes to put it behind him," Rubenstein said.

Richards said his tirade was fueled by anger at being heckled, not by bigotry.