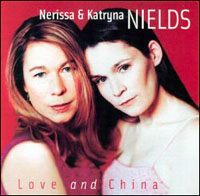 Due to unexpected changes in immigration policies, the Nields were forced to cancel their Canadian shows at Hugh's Room in Toronto on March 21, at the National Library Auditorium in Ottawa on March 22, and at the Black Sheep Inn in Wakefield, QC on March 23.

"Nerissa and Katryna were turned back at the
airport early this morning at Hartford, CT, by Air
Canada because one of their passports (which they had with
them, in addition to copies of their contracts and all sorts
of other ID) was out of date," said concert presenter Richard Flohil. "United Airlines made a
similar decision. This heightened security – the direct
result of George Bush's misadventure in the Middle East – is
now part of our new life. ID, working papers, drivers'
licenses and even an outdated passport add up to naught.
And anyone who looks as much like terrorists as these young
women are obviously to be targeted as severe risks. Hey, I
think the other side already won this 'war.'"

"As the promoter, I am sorry that this has occurred; it's
only the second time in the club's history that Hugh's Room
has had to cancel a show. (The other time was the day after
the World Trade Centre disaster, when it was decided not to
proceed with a Susan Werner performance). The Nields are
deeply apologetic (they've also lost engagements in Ottawa
and at the Black Sheep in Wakefield, Quebec). They will
return, with Katryna's newly updated passport in hand, as
soon as we can make the arrangements."