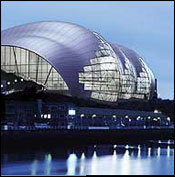 GATESHEAD, ENGLAND (CelebrityAccess MediaWire) — The new Sage Gateshead had a unique inaugural weekend as it opened its doors to the public. Groups of 1,500 people were allowed in every three hours to see a 40 minutes of music and attend workshops. Sage, the software company that sponsors the venue, gave out free tickets to the opening.

The Sage includes a 1,700 seat concert hall as well as a smaller hall that seats 400. Overlooking the River Tyne, the venue also boasts concourses, cafes and classrooms beneath a monstrous 750 ton steel glass shell.

The Sage will be the new home for the Northern Sinfonia. Also slated to perform in the coming months are Nick Cave, Sting, the Grimethorpe Colliery Band, Lesley Garrett and the City of Birmingham Symphony Orchestra featuring Sakari Orama.

Lord Norman Foster, designer of the Sage, said he hoped the venue would be more than just a concert hall. “When we designed The Sage Gateshead, it was foremost in our minds that the project should not only contribute to the urban regeneration of Gateshead and symbolise the cultural emergence of Tyneside, but also provide an urban living room in which the local community can enjoy a wide range of music.” –by CelebrityAccess Staff Writers