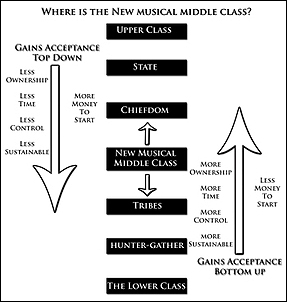 I teased this essay from music industry philosopher and frequent Hypebot contributor Kyle Bylin with a graphic yesterday. Today Kyle delivers on his promise with a thoughtful look at the on going evolution of the music industry. Set some time aside as we all slow down for the holidays to absorb what Kyle has to say. It's a worthy read.

Talcott Parsons, a former Harvard professor, believed society was in a natural state of equilibrium or balance. In reference to his equilibrium model, when changes occur in one part of society there must be adjustments made in the others. If this does not take place, the equilibrium of society would be endangered and tension is placed on its social order. Parsons goes onto illustrate how society changes by dividing evolution into four distinct and inevitable processes.

Using these four processes, I will reflect on how they relate to what social changes have been occurring in the music industry. This is an attempt to move away from the concept of The Digital Music Revolution and begin the exploration of the four stages in The Social Music Evolution.

Stage One – Differentiation, also known as division, refers to the increase in complexity of social organizations which in turn creates functional subsystems from the main system.

In The Fall Of Communization And The Rise Of The Music Fan I elaborated on what professor Mike Wesch called a cultural inversion and found that his insights in An anthropological introduction to YouTube brought forth a perfect example of how the way people interact with music has changed.