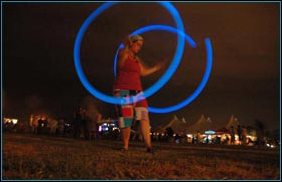 BRIDGEPORT, CT (CelebrityAccess MediaWire) -— Grateful Dead bassist Phil Lesh and Friends and New Orleans legends The Neville Brothers, who celebrate 30 years of performing together, highlight the initial lineup for this summer’s Gathering of the Vibes. The thirteenth annual music, camping and arts festival is set for July 31–Aug. 3 at Bridgeport’s Seaside Park. The event has again endeavored to support a number of local and national charitable and not-for-profit organizations.

Gathering of the Vibes 2008 marks the festival’s fourth stint at Seaside Park, after drawing nearly 25,000 revelers to the Long Island Sound venue in 2007. Camping attendees will enjoy the park’s full 370 acres of plush fields, shaded groves, and peaceful beaches, while non-camping guests are offered convenient shuttle service to satellite parking lots and local hotels, as well as to the Bridgeport Metro North station and Port Jefferson Ferry.

As in previous years, Gathering of the Vibes has again made it a priority to support a variety of social causes. Locally, festival organizers have pledged $5,000 to Bridgeport charities as well as the Connecticut Special Olympics. Attendees are also actively encouraged to help best the 3,300 pounds of nonperishable items that were donated to the Bridgeport Veterans Affairs Food Bank at the 2007 event. On a national level, the Vibes has partnered with HeadCount, a not-for-profit organization devoted to voter registration, in its "Cents for Sense" campaign and will donate 50 cents from the sale of each ticket to help register voters at designated concerts and festivals throughout the country this summer. Additionally, the festival has introduced a bold Green Vibes environmental initiative to educate and equip fans with the tools necessary to raise awareness about global climate change.

Gathering of the Vibes began in 1996 as a celebration of the life of Jerry Garcia, who passed away the previous summer. Initially named Deadhead Heaven, the festival provides an annual forum for fans from across the country to remember the counterculture icon. In each of its past twelve years, Gathering of the Vibes has paired legendary artists with emerging acts to appeal to a wide cross-section of live music fans. – CelebrityAccess Staff Writers