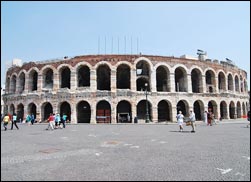 Rather than awarding prizes in individual categories, the WMA show is for Italian artists who have received gold or platinum albums in the last year.

A total of 12,000 spectators attended each of the two nights, which will be broadcast in three parts on the Silvio Berlusconi-owned Italia Uno TV network on June 2, 9 and 16.

The event, which is sponsored by the Wind mobile phone company, has no official role, but it does enjoy the full cooperation of the Italian music industry's three main representative bodies, namely FIMI (for the majors), PMI and AFI (for the indies).

The Awards show was produced by Francesco Salzano of the F&P agency and Giancarlo Mazzi on behalf of Arena Extra. Mazzi also directs Italy's flagship Sanremo festival in February.

The Verona arena had traditionally been the setting for the final night of Italy's summer-long Festivalbar festival, which had been a feature of the calendar since 1964. Festivalbar has not, however, been held since 2007 and the Wind Music Awards appear to be taking its place as Italy's principle summer music event.