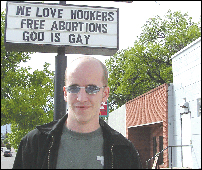 "It cheered me up," Darkside owner Dean Dunston says of his parting middle-finger-message to the club's passersby, according to The Independent

Behind the vulgarity, one could sense the frustration of yet another music venue going down in flames. Dunston owned Darkside, at 2106 E. Platte Ave., for 10 months before it folded late September by court-ordered eviction, in part for alleged failure to pay rent.

Darkside's is just the latest closing of a local music venue that had attracted national acts. The Navajo Hogan, a north side bar that allowed all-ages shows, collapsed in June due to legal woes. 32 Bleu, a downtown nightclub, shuttered its operation in January; it then transformed into a honky-tonk that closed just months later.

Some expressed optimism about Darkside's closure, however, because it made room for Boulder promoter, Mike Barsch of Soda Jerk Presents, to come in and open The Black Sheep.

Both musicians and promoters interviewed for this article expressed hope that this club will last.

With more than half a million people living in the Pikes Peak metro area, Colorado Springs' music scene defies its potential.

Poor management, criminal charges (such as allegations of drug dealing at the Navajo Hogan), thuggish bouncers and lackluster promotion repeatedly have deadened what could be a more vibrant scene.

"Hopefully [Black Sheep] will mean some stability," says Adam Leech, a local music promoter and owner of The Leechpit music and clothing store, "because recently, it's been bad."

The Platte Avenue venue has hosted a series of different clubs over 15 years, under names including Pure Energy, Sin City, Velvet Underground, Industrial Nation and, most recently, Darkside.

"That's always been the scene's downfall — a lack of consistency," he says. The result, he says, leads to "culture drain," when creative people leave for other cities.

The Black Sheep is an All Ages venue with a capacity of 450 people. It includes a full service bar for its twenty-one and over patrons, and has dressing rooms available for band use on the lower level. As Colorado Springs only dedicated live music venue The Black Sheep has already begun to draw a very loyal following amongst locals and has already played host to such acts as Strung Out, Lagwagon, Jedi Mind Tricks, and Rasputina, just to name a few. The Black Sheep is also looking forward to 2006 with such acts as The Reverend Horton Heat, Everytime I Die, Low, and The Big Wu already scheduled to play.

While Soda Jerk Presents is known for its promotion of Punk, Emo, Indie Rock, Metal and Hardcore, they also realize the importance of a diverse line-up and schedule of bands. According to Mike Barsch (owner of Soda Jerk Presents and talent buyer for the club), “We’re committed to bringing a wide variety of acts into the room. We know that “if we build it, they will come”. We’ve been doing shows in the Springs for about 4 years now, we’ve done a lot to develop the market, and there are a ton of music fans dying to see their favorite bands come to town.”

While often overlooked by many tours, Colorado Springs is home to four colleges (University of Colorado- Colorado Springs, Colorado College, The United States Air Force Academy and Pikes Peak Community College), and has a population of approximately 500,000 people. Additionally, it makes for easy routing to not only the Denver/Boulder market, but also Phoenix and Albuquerque.