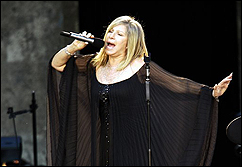 LONDON (CelebrityAccess MediaWire) — High ticket prices are adding up to trouble for major touring acts in Europe this year. George Michael and The Who have been forced to cancel dates at major venues due to poor ticket sales while other performers such as the Rolling Stones and Barbra Streisand, with a "the show must go on" mentality, have played to much smaller crowds than they might have hoped for.

Ticket prices in the US are high but in Europe, they are through the roof. As record sales continue to to freefall, the focus of the music industry turns increasingly towards the profits to be garnered from touring, but if this summer is any indicator, there is a limit to that as well.

Case in point, the Rolling Stones recent appearance at Belgium's Werchter Festival, where, according to The Times, they only sold 33,000 out of the 70,000 tickets that were available. And this after a sparsely populated Paris show at the Stade de France. Other acts have fared similarly. Streisand's hugely successful U.S. tour didn't translate well on the Continent. With tickets going for as much as $800 dollars at the box office, her first and allegedly last Paris show had thousands of unsold seats. The Times report detailed Paris promoters "upgrading" people in cheap seats to fill empty rows up front. Her shows in Nice and Rome were called off, reportedly for technical reasons, but many observers also pointed to the protests by consumer groups against the high price of admission.

The UK seems to be the one place that has resisted this trend. Streisand's appearance at Manchester's MEN Arena on July 10 wasn't sold out but they moved 14,000 seats and her three dates the O2 Arena later this month are still on track with the highest ticket prices to be found with some seats topping $1675 dollars. – CelebrityAccess Staff Writers