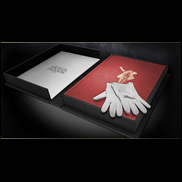 LOS ANGELES (CelebrityAccess MediaWire) — Ticketmaster and luxury publishing and media company Kraken Opus today kicked-off a strategic partnership to exclusively market and sell the Official Michael Jackson Opus to fans around the world through Ticketmaster.com. Unveiled for the first time on NBC's TODAY show on Wednesday, August 12, 2009, fans can log on to ticketmaster.com/michaeljacksonopus now to pre-order the ultimate anthology of the icon.

The Official Michael Jackson Opus is the only new licensed book that is endorsed and approved by the Michael Jackson estate and marks the first publication to be marketed and sold exclusively by Ticketmaster. The Opus features a moving 400+ page definitive photographic record of the man and his music — including new, never-before-seen contents. Accompanying this definitive anthology is an epic collection of stories, essays and comments from some of the most well-known names in the entertainment industry. Each page in the Opus will measure 13" wide x 18" high, will be hand bound in leather and packaged in an elegant silk clamshell case and weighs an astonishing 38 pounds.

Ticketmaster CEO Irving Azoff says, "As one of the world's most trusted and popular e-commerce sites, Ticketmaster is pleased to continue our strategic 'Beyond the Ticket' initiative as the exclusive marketing and retail arm for the only Official Michael Jackson Opus publication."

Jeff Wald, president and COO of Kraken Opus North America, says, "Spending time with Michael was a thrill as I watched him get excited over the quality of the Opuses we brought to show him. I'm sure that the release of this Opus at a price point that his fans can afford would have pleased Michael no end. And, thanks to our chief marketing partner Ticketmaster, the Official Michael Jackson Opus will be available to fans anywhere in the world." –by CelebrityAccess Staff Writers