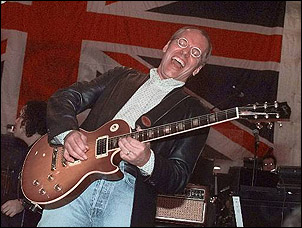 An August 29 Peter Frampton concert at Veterans Memorial Park in Manchester, NH has been given the green light. Parks, Recreation and Cemetery Director Ron Ludwig had refused to give his approval to hold the concert but a committee of aldermen, unhappy with the recommendation of city officials, granted promoter Morgan Entertainment a license to stage the show.

"To me, 5,000 (people) would probably have an adverse impact on the park the way it is today," Ludwig told the Union Leader.

The concert's capacity has been capped at 4,000 and the committee on administration and information systems are requiring Morgan to pay up front for city police, parks, fire and sound monitoring costs. The issue of alcohol sales has not been resolved. Ludwig says a crowd of 4,000 "pushes the envelope, but we’ll go with it, we’ll try," he consented. Tickets will be approximately $15 for general admission and $30 for reserved seating. There will be two to three opening acts, tba.

officials have derailed two shows by the surviving members of the Grateful Dead — Mickey Hart, Bill Kreutzmann, Phil Lesh, and Bob Weir — who will reunite as The Other Ones for Terrapin Station, A Grateful Dead Family Reunion, because the Dead culture presents too much trouble for the city. The concerts, initially scheduled for August 3-4 at Hutchinson Field (located at the south end of Grant Park) and promoted by Jam Productions, have now been moved to Alpine Valley Music Theatre in East Troy, WI, and will be promoted by Jam competitor Clear Channel Entertainment.

The shows, taking place August 3-4, will not only mark the first time all four members are performing a full set together since 1995, it will also celebrate the music, art, and culture of the Grateful Dead. Ticket prices will be $44.50 per day, plus a $.50 donation to the Unbroken Chain and Rex Foundations and applicable surcharges.

"After Radiohead, the Park District wanted us to do more shows in Hutchinson Field, but we were rudely awakened when they turned down Terrapin Station at the very last minute," Jam's Jerry Mickelson told the Chicago Sun-Times.

"The Park District needs to look at raising alternative funds and re-energizing Grant Park, bringing more exciting events and more people into the park, and one of the ways is by having concerts," Bob O'Neill of the Grant Park Advisory Council told the paper. "But the issue with the Grateful Dead–and this is no discrimination based on any type of music–is that the venue is not constructed yet, and two days of concerts there would just burden the park too much."

"What's going on is that somebody is responding to stereotypes instead of the facts," Dennis McNally, longtime spokesman for the Dead, said. "The facts are that we did seven or eight shows at Soldier Field with nary a complaint. The fact is that that strip of park land is an ideal location. Some very sensible land-use planner in Chicago a long time ago set that up because it's a nice place for people to come together and celebrate and not bother other people. The fact that this show isn't happening there is a great pity."

Thornton, Costello to Tour Together

Thornton's counting on an Elvis sighting.

The "Monster's Ball" actor and screenwriting Oscar-winner for "Sling Blade" began a two-week, nine-city concert tour Friday showcasing his rockabilly musical roots. He announced he's going to team up with rocker Elvis Costello on dates in Minnesota, Michigan and Ohio.

Costello joined him on stage for a surprise guest appearance in Dublin.

"I have always been an admirer of Elvis Costello, and when he jammed with us in Dublin, we had a great time. He is one of our generation's most prolific singer-songwriters, and I'm thrilled that he has invited me and my band to join him on his tour," Thornton said Friday.

one of the best-selling country bands of all time, announced that it will perform its farewell tour next year.

The announcement came during the Academy of Country Music Awards on Wednesday night.

Alabama, which began as a bar band in Myrtle Beach, S.C., has sold more than 65 million albums and scored a seemingly endless run of hits, including "Love in the First Degree," "Old Flame" and "Can't Keep a Good Man Down."

"They've served their country well. They deserve to retire if that's what they want to do," said country singer Trace Adkins.

"I know where their heads are at," said veteran performer Ronnie Dunn. "They've had a great career and been a great inspiration."

In 1989, Alabama was named country music artist of the '80s by the Academy of Country Music and Billboard magazine. The Recording Industry Association of America named the band Country Group of the Century and the band has received 21 American Music Awards.

Last year, the band, known for its hot fiddle music and well-crafted love songs, put out its latest album, "When It All Goes South." In addition to Owen, the band consists of Teddy Gentry, Jeff Cook and Mark Herndon.

annual Beatles tribute tour, "A Walk Down Abbey Road — A Tribute to the Beatles," will kick off on June 24 in San Diego. Todd Rundgren and Alan Parsons have signed on to do the tour again this year along with first timers Jack Bruce, Mark Farner and Christopher Cross. Ann Wilson and John Entwistle were on board last year.

Original Bassist Returns To Tom Petty And the Heartbreakers Fold

For the upcoming Tom Petty and the Heartbreakers 31-date US tour, original bassist Ron Blaire returns to the band. Howie Epstein, who replaced Blair and is now being replaced by Blair, has been struggling with personal problems, including a recent arrest for heroin possession.