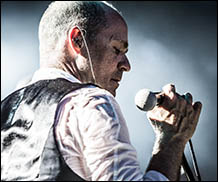 TORONTO (CelebrityAccess) — Gordon Edgar Downie, lead singer and lyricist and founding member of the iconic Canadian rock band The Tragically Hip has died. He was 53.

Downie died after a battle with glioblastoma, an aggressive form of brain cancer which was discovered after Downie suffered a seizure in 2015.

A statement from the remaining members of the band posted to their website on Tuesday night said:

"Last night Gord quietly passed away with his beloved children and family close by.

Gord knew this day was coming – his response was to spend this precious time as he always had – making music, making memories and expressing deep gratitude to his family and friends for a life well lived, often sealing it with a kiss… on the lips.

Gord said he had lived many lives. As a musician, he lived “the life” for over 30 years, lucky to do most of it with his high school buddies. At home, he worked just as tirelessly at being a good father, son, brother, husband, and friend. No one worked harder on every part of their life than Gord. No one.

We would like to thank all the kind folks at KGH and Sunnybrook, Gord’s bandmates, management team, friends, and fans. Thank you for all the help and support over the past two years.

Thank you, everyone, for all the respect, admiration and love you have given Gord throughout the years – those tender offerings touched his heart and he takes them with him now as he walks among the stars."

Downie revealed his diagnosis last year before the Tragically Hip embarked on a final summer concert tour that would become a touchstone for his Canadian fans. The tour's final show in Kingston on Aug. 20, 2016, was televised live on the CBC with millions tuning in for the group's final performance.

A native of Kingston, Ontario, Gordon Downie met the future members of The Tragically Hip while attending high school. Comprised of Rob Baker, Johnny Fay, Davis Manning, and Gord Sinclair, the band launched in 1983, primarily performing covers in local venues around the Toronto region until they were signed to MCA Records by Bruce Dickinson following a gig at the Horseshoe Tavern in Toronto.

The Tragically Hip scored some early hits on Canadian radio, including "Small Town Bring-Down" and with a live version of "Highway Girl" and the band's live shows, replete with onstage antics and Downie's storytelling and stage presence helped them create lifelong fans.

"The first time we heard him [Downie] open his mouth, we just went, holy shit. At the end of their set that night, the whole place stood up and clapped and it was undeniable if you were in the room that night that this was something special," longtime manager Jake Gold told the CBC.

The Tragically Hip would go on to record 13 full studio albums, nine of which hit #1 on the Canadian charts, including the 6x platinum certified "Day For Night" (1994), as well as two albums that peaked at #2 and "Now for Plan A" in 2012 which topped out at #3.

Downie was also known for his environmental activism with a focus on water rights. He was a board member of Lake Ontario Waterkeeper and a member of the Swim Drink Fish Music club, a coalition of artists raising money for water rights organizations in Canada.

Downie was also an outspoken advocate for Canada's First Nation and helped to raise awareness of the challenges they face. In 2016, Downie helped to found The Gord Downie and Chanie Wenjack Fund to support reconciliation between Indigenous and non-Indigenous peoples.

"The death of The Tragically Hip's frontman Gord Downie of cancer at 53 comes as a tremendous blow to Canadians," says CelebrityAccess senior editor Larry LeBlanc who is based in Toronto. "Like many, I was shocked by the news of Gord's diagnosis with terminal brain cancer in 2016. I had covered the band while as Canadian bureau chief at Billboard since its first recording in 1987. The band's final concert, held at the Rogers K-Rock Centre in their hometown of Kingston, Ontario on August 20, 2016, broadcast by the Canadian Broadcasting Corporation as a cross-platform television, radio, and internet streaming special, drew an audience of 4,04 million viewers. Gord touched so many lives in Canada, and he won't be forgotten."