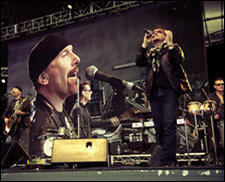 Moreover, U2's '360' still has an additional 26 dates on the books and Live Nation is expecting that when all is said and done, ticket sales will have topped the $700 million mark.

Thus far, U2 360 has been seen by more than 5 million fans with performances across Europe, Russia, North America, South America, South Africa, Australia and New Zealand. By the time the tour wraps up on July 30, another 2 million people will have been added to the totals.

"These numbers are staggering, a fantastic result. U2 have invented a new style of rock show and they continue to deliver their fans the best possible live experience. An in-the-round transportable stadium production is something that the touring industry has been trying to figure out for some time. The extra capacity that the U2 360 creates also allows for a large number, several thousand in fact, of low priced tickets at every show," said Live Nation's Arthur Fogel, the tours promoter/producer.

"That dollar figure for the gross looks enormous! Of course I can't tell you what the net is, but I can tell you that the band spend enormous sums on production for their audience. Fans all over the world agree that a ticket to U2 360 is good value for money. We're really proud of this tour and this achievement is great news, coming as we head back into North America." added U2's manager Paul McGuinness. – CelebrityAccess Staff Writers