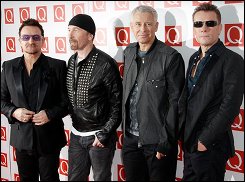 LOS ANGELES (CelebrityAccess MediaWire) — Irish rock band U2 has this week finalized their new management contract with Live Nation and Guy Oseary and finally broken their silence on their split with longtime manager Paul McGuinness.

As previously reported in CelebrityAccess, McGuiness announced that he was stepping down as the band's manager in November after Live Nation announced that it was buying McGuiness's Principle Management and Oseary's management firm Maverick as a part of a $30 million dollar deal.

In a post on the band's website announcing that their new contract had been signed, a spokesperson for U2 wrote:

The band now want to publicly thank Paul McGuinness for his extraordinary leadership, guidance and friendship over the last 35 years.

Paul has saved us from ourselves many times over and we would not be U2 without him.

Sometime soon, U2 will begin a new adventure around the world and we totally understand and respect Paul's desire to not run away with the circus – AGAIN.

Perhaps more than any music management operation in history, Paul, alongside Trevor, Keryn and the team at Principle Management has always fought for our rights, for our music, for our fans and for the principles that we and he believe in. His central lesson was that if you cared for your "art", you must also "take care of business" as historically with rock and roll bands, the latter has undone the former.

We are relieved he will remain on as the mentor-in-chief.

We've known Guy for a long, long time, and we're excited that with Paul's blessing he's agreed to take us on. He is a brilliant man with a lot of energy, and knows he has got some big shoes to fill.' – Staff Writers