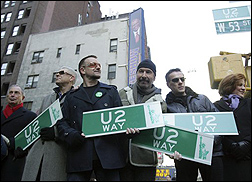 The concert, surprisingly small in scale for a band with U2's draw, was held on a grassy quad on the University's Bronx campus. Numerous local residents who had caught wind of the event turned out, hoping to get in, or even to see a glimpse of the band, but were turned away by heavy police presence after being unable to produce valid student I.D.

"We heard it was a free concert — we didn't know you needed ID to get in," one woman, Liz Jones, 28 told a blogger for the New York Times. "We've tried begging, pleading, jumping the fence. We can't get in."

As for why U2 chose to do a small, free gig at such an out of the way location, Fordham's president Joseph M. McShane told the crowd:

"You may wonder why U2 chose us, they chose us because we're in New York, because we are Fordham, because of the warmth of the campus," then linking the school's ostensibly progressive politics with the band's, he added "social justice, service of the poor and advocacy."

The band had already been in the city, having been honored by mayor Michael Bloomberg with the temporary naming of a section of West 53rd street 'U2 Way.' – CelebrityAccess Staff Writers."