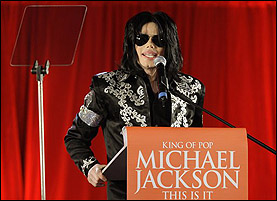 LONDON (VIP-NEWS) — AEG president and CEO Tim Leiweke revealed that Michael Jackson is set to perform 20 to 25 shows at London's O2 Arena and that the singer is "very focused." Leiweke was speaking during his keynote Q&A session at the Billboard Music & Money Symposium at the St. Regis Hotel in New York City.

The run of Jackson shows, set to begin on July 8, will be announced at a press conference later today (March 5).

The shows will be promoted by AEG Live, which also put together Prince's record-setting run of 21 sellouts at the O2 that grossed more than $22 million. The Spice Girls, Take That, and Kylie Minogue all have played multiple nights at the London arena, and Britney Spears has an eight night run scheduled for June. AEG operates the O2 venue.

"Despite everything you read about him, he was fine," added Leiweke. "The man took a physical for us to go do these concerts."

Leiweke also confirmed that it has taken some time to get Jackson to agree to the deal. Jackson has not released a studio album or played a full concert since 2001. His last major tour was the "HIStory" World Tour in 1996-1997.

"We spent two years working with Michael trying to get him comfortable with this," said Leiweke.

Asked why the comeback was being staged in London at the O2, Leiweke commented: "It's the most important venue in music today. With all due respect to the Staples Center and the [Madison Square] Garden, the O2 is where you went to see Led Zeppelin reunite." According to Billboard