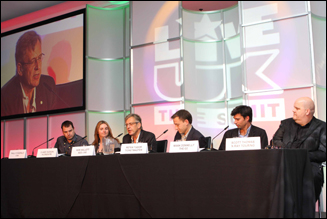 LONDON (CelebrityAccess MediaWire) — Another UK Live Summit has concluded and this year's event was one for the record books.

The delicate state of the economy was on the minds of many panelists and speakers such as AEG's Rob Hallett, who warned delegates that avariciousness by promoters or artists would only serve to alienate fans and that ticket prices much match their target demographic.

Isle of Wight organizer John Giddings lent his voice to this concern as well, telling delegates that festivals must "keep ticket prices down and give the audience entertainment outside just the bands" in order to survive; and X-Ray Touring's Jeff Craft said, "People always have choices. If we overprice the product, like record companies did, they will go somewhere else."

The first day saw panels on developing emerging talent and the audience was polled via electronic tally if they felt that record labels were still an integral component of breaking a band to to which 66% percent of the respondents said that they did not.

Other panels on the first day covered a wide range of topics:

The Golden Ticket panel discussed, in two sections – one for the primary and one for the secondary market, issues surrounding primary and secondary ticketing, including technology and infrastructure improvements, the effect of hidden charges in ticket prices and the importance of artists being involved in the process.

The Critical Mass panel examined the development and maintenance of the live sector's relationship with the fan. This panel examined issues from health and safety at events to ticket sales trends to how television and online formats are becoming increasingly relevant.

In The Touring Game, the discussion ranged from how festivals are competing with each other rather than the larger touring market to how artists should evaluate their options for merch sales while on tour.

AEG Live president of international touring, Rob Hallet discussed the company's strategy for investing in and developing touring artists. Hallett explained that in return for their investment, they encouraged artists to stay with him as a promoter for a set period of time during which AEG could recoup their early investment.

Hallett agreed with this, adding, "The only thing that's going to kill us is greed and the greed of artists."

Other sessions touched on a number of hot issues in the industry, including the need to continue to "green" the live entertainment business and a lively debate on the value of the student union circuit in breaking new acts.

Day two at the Summit continued with panels and seminars on a panoply of subjects, including:

"We're finding more and more promoters throughout the world are more interested in the UK's new young artists who are interested in booking brand new bands and working with us in artiste development." Warnock said.

In The Fields of Gold Session, John Giddings (Isle of Wight), Chris Greenwood (The Big Chill) Kilimanjaro Live MD Stuart Galbraith and others talked about the state of the festival biz, touching on topics such as the competition for headliners, the possible effects of the global financial markets on festivals. Giddings jokingly (or perhaps only half-jokingly) suggested licensing bands to restrict them from appearing at more than 5 festivals a year in the UK.

The Producers panel, moderated by Andy Lenthall along with a panel that included XL Video's Des Fallon, Star Events' Phil Addyman and lighting designer Rob Sinclair agreed that more investment needed to be made into production and how economic inflation had impacted production budgets.

Tomorrow's World, the final session at the UK Live Summit looked at the future of the industry with a panel moderator Mark Meharry of Music Glue.

Panelists expressed their predictions for the future with X-Ray Touring's Jeff Craft noting that he expects the live market to continue to expand and that artists will continue to look for ways to develop new revenue streams.

As always, the UK Live Summit presents important issues that are relevant to the industry at large and provides a forum for lively debate. — by CelebrityAccess Staff Writers