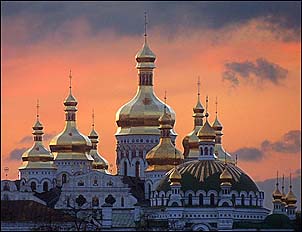 Foreign Ministry spokesman Markian Lubkivskyi told reporters that passage of stronger anti-piracy laws "in the nearest future" to meet global standards was a top aim for the government.

His comments came after a U.S. Trade Representative report designated Ukraine the only "priority foreign country" in the world — a ranking reserved for the worst offenders of intellectual property rights. Ukraine is accused of making millions of CDs containing pirated computer programs, music, and videos.

In January 2002, the United States slapped $75 million in trade sanctions on Ukrainian textiles, steel and other metal exports in connection with pirate CD production.

"Three factories operating now in Ukraine are working flat out producing legal CDs," the Interfax news agency quoted Paladiy as saying. "Nobody would risk losing everything if a lot of pirate CDs were found."

The U.S. record industry has estimated piracy costs it some $200 million each year.

Russia to Crack Down on Software Piracy

MOSCOW (AP) — Russian officials promised to take tougher action to protect intellectual property rights and rid the country of its reputation as a major producer of counterfeit music and videos.

"Intellectual property is the most important resource, including for economic growth," Prime Minister Mikhail Kasyanov told a meeting of the government commission created to fight the problem, according to the ITAR-Tass news agency.

Russia has come under increasing pressure, particularly from the United States, to do more to tackle software piracy. Washington says Russia is the world's second largest producer of counterfeit music and video products after China.

Russia's Interior Ministry estimates the turnover in pirated goods at $1 billion to $5 billion, and Kasyanov acknowledged Tuesday that "chaos and illegality reign supreme in this sphere at present."

Licensed CDs and cassettes are far more expensive than pirated goods, and many Russians say counterfeit products are the only ones they can afford, making a crackdown unpopular and thereby reducing the political incentive for the government to get involved.

Media Minister Mikhail Lesin said the government would try to take measures that would ensure that neither the consumer nor the vendor suffers, the Interfax news agency reported.

He said the government commission expects to draft its proposals by September. The aim will be to "harmonize the national laws concerning copyright and adjacent rights with international conventions and international legislation," ITAR-Tass quoted Lesin as saying.

Russian law enforcement officers routinely conduct very public raids on illegal markets, but usually the sellers are back in business within days.