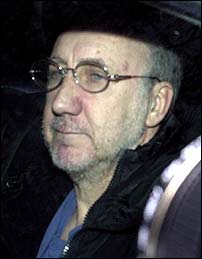 LONDON (AP) _ Rock guitarist Pete Townshend, co-founder of The Who, was cleared Wednesday of possessing pornographic images of children but still was placed on a national register of sex offenders.

That registration was part of a formal police caution Townshend received for accessing a Web site containing images of child abuse.

Townshend was arrested in January on suspicion of making and possessing indecent images of children. The arrest was part of Operation Ore, an FBI-led crackdown on Internet child pornography.

After a four-month investigation, London's Metropolitan Police said Wednesday the 57-year-old rocker "was not in possession of any downloaded child abuse images" but had accessed a site containing such images in 1999.

The musician acknowledged using his credit card to enter a Web site advertising child pornography but said he was doing research for his autobiography.

"I am not a pedophile," Townshend said at the time of his arrest.

The title character in Townshend's rock opera "Tommy" — a deaf, dumb and blind pinball wizard — is sexually abused by an uncle, and Townshend said he believed he was sexually abused as a young boy while in the care of his mentally ill grandmother.

On Wednesday, Townshend acknowledged he had been wrong to access the Web site, but said police had accepted he had no "nefarious purpose" in doing so.

"As I made clear at the outset, I accessed the site because of my concerns at the shocking material readily available on the Internet to children as well as adults, and as part of my research toward the campaign I had been putting together since 1995 to counter damage done by all kinds of pornography on the Internet, but especially any involving child abuse," he said in a statement.

Police said it was not a defense "to access these images for research or out of curiosity."

As part of the cautioning procedure, Townshend's fingerprints, photograph and a DNA sample will be taken by police and he will be placed on a national sex offender registry for five years.

Townshend was one of The Who's four founding members, along with bassist John Entwistle, singer Roger Daltrey and drummer Keith Moon. Moon died in 1978 and Entwistle died last year, but surviving band members continued touring.

The group, founded in London in the early 1960s, was part of the first British rock invasion with the Rolling Stones and The Beatles. Their hits included "My Generation," "I Can See for Miles," "Pinball Wizard" and "Won't Get Fooled Again."

The verdict in the penalty phase of the trial provides roughly $24 million in compensatory damages and $108 million in punitive damages to New York-based TVT Records.

Haviland said Gottlieb was "left in ruins" when he could not release the album he was counting on.

Island Def Jam lawyer James M. Larossa agreed that Gottlieb and his record company were entitled to the finished but unreleased album, money for costs he cannot recoup and other factors.

"But he's not entitled to a windfall," Larossa said. "Punitive damages don't belong in this case."

The verdict drew promises of appeal from Larossa and other lawyers representing Island Def Jam, a subsidiary of Universal Music Group, the world's largest record company, which is owned by French media giant Vivendi Universal.

"We're disappointed with the jury's verdict," said Matthew S. Dontzin, a lawyer for Island Def Jam and its chief executive officer, Lyor Cohen. "We don't think it's supported by the facts or the law."

In a statement, Gottlieb said he was "extremely pleased" with the verdict. Haviland said Def Jam and Cohen were "bullies" who "finally got caught."

NEW ORLEANS (AP) — Rapper Juvenile did not steal his most successful song from a rival New Orleans performer, a federal jury has ruled.

Juvenile, whose real name is Terius Gray, was sued by Jerome "DJ Jubilee" Temple, who claimed he created "Back That A– Up," Juvenile's 1998 hit that sold millions of records. Jubilee and his record label, Positive Black Talk Inc., claimed Juvenile, Cash Money Records and Cash Money's national partner, Universal Records, violated copyright laws by using the song without permission.

A federal court jury ruled Monday in Juvenile's favor, deciding that the song was his creation and was not cribbed from a Jubilee song with a similar title. Both rappers testified in the trial, as did two experts: a University of New Orleans music professor who said the versions were similar; and a Tulane University professor, who testified they were not.

Jubilee is considered a pioneer of the New Orleans brand of rap, known as "bounce," which features singsong, call-and-response refrains and beats. His singles are popular locally, but national success has eluded him. He works as a high school special education teacher.

In interviews, Jubilee has cast himself as the unsung originator of songs and catch phrases that other local rappers copied, earning millions. His attorneys claim Juvenile is among them.

Juvenile became one of rap's biggest new stars in 1999 with the success of "Back That A– Up" and its video. Cash Money grew into a powerful label in the rap world.

LAS VEGAS (AP) — A lawyer for singer Celine Dion's husband, Rene Angelil, said Las Vegas police are returning a jacket to a woman who alleges that Angelil raped her and that the garment has evidence of Angelil's DNA.

"Once and for all, this is the end of an effort to collect money," the Las Vegas Review-Journal quoted Chesnoff as saying in its Monday editions.

"Justice in this town is a joke," Langford said. "It belongs to the rich and powerful."

Sung, of Pasadena, Calif., alleged Angelil followed her to her hotel room at the Imperial Palace on March 19, 2000. At first, she said Angelil fondled her, but she did not immediately report the matter to police.

That year, Angelil paid Sung and her husband $2 million in a confidential settlement to keep the claims quiet. Angelil has denied any wrongdoing.

In March 2002, when Sung was facing arrest on allegations she wrote hundreds of thousands of dollars in bad checks at Las Vegas casinos, she alleged she was raped and, authorities said, demanded at least $13.5 million from Angelil.

Sung turned over to police items including hairs she said had been pulled from her head, a broken fingernail and a white cloth she said was stained with Angelil's semen.

However, police said she withheld the jacket despite repeated requests by police that she turn it over.

Police shut down the investigation early this year and charged Sung and Kwon with attempting to extort Angelil.

Sung remains in a Clark County jail on an immigration charge, and also faces charges that she failed to repay $900,000 worth of loans to two Las Vegas casinos in 2001. Those cases are pending.

Chesnoff said police told him recently that they have written Langford a letter telling him the rape case is closed. The dress is supposed to accompany the letter.

"It was a ploy to help them get out of their criminal case and nothing more," Chesnoff said.

Dion is a French-Canadian singer best known for "My Heart Will Go On" from the film "Titanic." She began a three-year engagement in March at Caesars Palace in Las Vegas.

FALL RIVER, Mass. (AP) — From on stage to on the witness stand. That's where Busta Rhymes found himself yesterday in Fall River, Mass., near Providence, R.I.

The last time Busta Rhymes was in the town four months ago he gave an impromptu performance at Jake's Twin Saloons. That's when the trouble started and the stories about what happened split. Celine Giguerre told police that Rhymes assaulted her after the performance. His lawyer said Rhymes was in fear for his life after his performance. The lawyer insists the incident with the woman never happened.

The judge handling the case is expected to decide in a couple of weeks if there is enough evidence to charge Rhymes with assault and battery.

LOS ANGELES (AP) — A federal jury has recommended a $1.5 million award to a British record company that sued rapper-producer Dr. Dre for song plagiarism, attorneys for both sides said.

U.S. District Judge Consuelo B. Marshall has yet to sign the judgment, Dre's attorney Howard King said Tuesday. A recorded telephone message left after business hours for King to elaborate on the award wasn't returned.