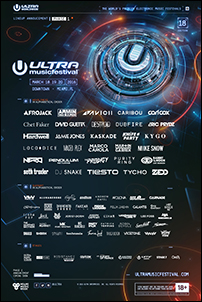 MIAMI (CelebrityAccess) — With just three months until it touches down at Bayfront Park in Downtown Miami, Ultra Worldwide's flagship event Ultra Music Festival announces the electrifying Phase One lineup for its eighteenth annual edition, taking place on March 18, 19 and 20, 2016.


In another move from the American festival juggernaut, whose lineups have always been diverse, Ultra Music Festival 2016 will see the return of three of the most revered live acts in the history of electronic music.


Dubbed "The Godfathers of Rave", UK pioneers and award-winning outfit The Prodigy will be making their Ultra Music Festival return. Australian Drum & Bass getup Pendulum will be heading back to Ultra Music Festival for the first time since 2011. The headline act for Ultra's very first edition, which took place on the sands of Miami Beach in 1999, will also be returning for their reunion. Rabbit In The Moon will be showcasing their visionary interpretation of psychedelic trance, house and breaks. Completing the Live programming for Phase One are additional headliners Caribou, Chet Faker, Destroid, Miike Snow, Nero, Purity Ring and Tycho.


As ever, ULTRA will also be welcoming a huge array of the finest, most in-demand DJs on the planet. Headlining the festival across a broad selection of stages this March will be Afrojack, Armin Van Buuren, Avicii, Carl Cox, David Guetta, Dubfire, Eric Prydz, Hardwell, Jamie Jones, Kaskade, Knife Party, Kygo, Loco Dice, Maceo Plex, Marco Carola, Martin Garrix, Seth Troxler, DJ Snake, Tiesto and Zedd.
As ever, Ultra ambassador and crowd favorite Carl Cox returns to the ULTRA Megastructure for a twelfth year to host his Carl Cox & Friends, as does Trance icon Armin Van Buuren, who will take the reins to bring his 'A State Of Trance' show to the masses.


Having made its Miami debut at the 2015 edition of Ultra Music Festival the Resistance stage will be returning to Downtown Miami this March.