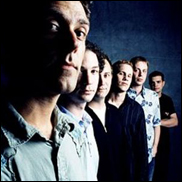 BOULDER, CO (CelebrityAccess MediaWire) — Umphrey's McGee launches a one-of-a-kind pre-order campaign for their new studio release, Mantis to drop January 20, 2009 on SCI Fidelity Records. The pre-order offers an MP3 download of the album in addition to the traditional compact disc, it also promises downloadable bonus content that will actually increase in volume depending on how many pre-orders are received, and will use innovative PUSH technology by Digital Insert to continue delivering exclusive bonus material throughout 2009.

Over 2 years in the making Mantis has been 2 years in the making. The album offers 100% new material – a drastic change of pace for a band whose typical modus operandi is to work out the material live on-stage before recording studio versions. Coupled with an innovative pre-order campaign offering unique bonus material incentives where fans can actually influence the amount of extra material that is offered.

'We wanted to do something special for the fans, make this release as exciting for them as it is for us,” explains Umphrey's McGee's Jake Cinninger. "We wanted to put the reins in their hands, get them involved in spreading the word about the album, and give the release a human touch by giving the fans more It's the give and take between us and the fans that make it possible for us to tour and grow as a band; the fans play an important role in everything we do."

Mantis bonus material "Part I" offers bonus tracks for pre-order customers – outtakes and alternate recordings of songs on Mantis, tracks culled from the Umphrey's McGee archives including often requested rarities from the band's annual acoustic holiday shows, tracks from historical "Taper Appreciation Nights," plus odds and ends from studio jams, sound checks and more. The more pre-orders that are purchased, the more tracks the band will unlock. Fans can use the free Mantis widget to track the growing list of free bonus material, which will be delivered via digital download the week of the album's release.

Mantis bonus material "Part II" incorporates PUSH technology by Digital Insert to deliver additional bonus content throughout 2009. PUSH requires no software installation or serial number; by simply putting the Mantis CD in your CD-ROM drive, the disc will act as a "key" to an Umphreys.com micro-site where fans get access to exclusive 2009 content as it becomes available – such as recent live versions of songs from Mantis, rehearsals and impromptu "bus jams," and more. Considering Umphrey's musical creativity and smart sense of humor, 2009's bonus material is sure to offer plenty of surprises.

Look for Umphrey's McGee to bring the songs on Mantis to the live stage beginning in January – when the band will work out the songs live and without a net.

Until then, Umphrey's McGee wraps up the year with dates in U.S. cities east and west and points between, including their annual New Year's run in their hometown of Chicago. This year, the band hosts three nights at the city's stunning Auditorium Theatre, where they'll be joined on stage by musical icons Buddy Guy, Stanley Jordan, Joshua Redman, Jeff Coffin, and Koko Taylor.