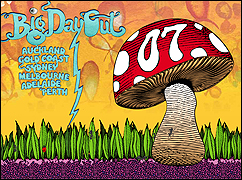 SYDNEY (CelebrityAccess MediaWire) — After a January 21st decision by Big Day Out organizers to attempt to discourage festival patrons from bringing Australian flags to the event, the hue and cry from the Aussie public has apparently convinced them to back away from the issue.

The controversy began with BDO promoter Ken West said that the flag had been used as "Gang Colors" by groups of fans who were brandishing flags and intimidating people into demonstrations of loyalty. The festival last year was held on Australia Day and came a scant few weeks after the racially motivated Cronulla riots which seem to have been instigated by radical Australian nationalists.

"I didn't like the behavior of last year and we have moved the event from Australia Day this year partly because of the way the flags were used," West said in an interview with Australian News Ltd, adding "The Australian flag was being used as gang colours. It was racism disguised as patriotism and I'm not going to tolerate it."

BDO organizers initially said that they would confiscate any flags, headbands or other items festooned with the national flag, but in the face of apparent public outrage they have subsequently issued a "clarification" that they are just discouraging patrons to bring them to the festival. The fans however, have not been complaint. Numerous attendees to the festival have been sporting the Aussie flag on t-shirts, hats, capes, etc. As of yet, there have been no reports of trouble.

This may be attributable to a strong police presence at the sold-out event. More than 50,000 attendees are expected. – CelebrityAccess Staff Writers