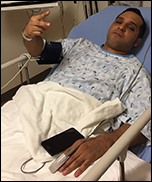 BOULDER, CO (CelebrityAccess) — British rocker Morrissey has canceled a handful of shows due to the "severe illness of a member of the band."

As previously reported in CelebrityAccess, Moz and company canceled a sold-out show just hours before they were to take the stage on Monday after the band's keyboardist Gustavo Manzur reportedly collapsed backstage.

In an update on his website, Morrissey's team now says that Manzur has been hospitalized and the band has now canceled three shows in Texas, including Nov. 16th at McFarlin Auditorium in Dallas; Nov. 17th at the Tobin Center in San Antonio and Nov. 19th at the White Oak Music Hall in Houston.

While the band did not disclose the nature of Manzur's illness, they reported that doctors have advised at least a week of rest for the keyboardist and said they are "determined to make the shows at Detroit, Cleveland and Chicago." – Staff Writers