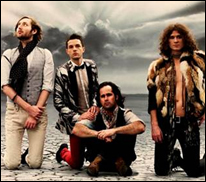 SYDNEY Australia (VIP NEWS) — The Killers has called off three Australian dates — including festival performances in Sydney and on the West coast — due to a family illness.


The band has pulled the plug on tonight's sold-out show at the 2,000-capacity Enmore Theatre, which was meant to serve as a warm-up for their appearance Saturday at the Good Vibrations Festival in Sydney, and the following day's GVF event at Perth's Claremont Showground.


Last month, guitarist Dave Keuning was reported as saying their shows in Australia would be their last gigs "for a while", which has lead to rumors that they're splitting up.


The Las Vegas rockers have released a statement saying they wanted to assure fans "that any concerns about the future of the band are unfounded", the band said they still intended to perform at the final two legs of the Good Vibrations Festival, which roll out Feb. 20 on the Gold Coast, and the next day in Melbourne.


The Killers were the main draw on the Good Vibrations tour, whose dance-oriented bill includes Basement Jaxx, Armand Van Helden and Gossip.


The late withdrawal will come as a blow to organizers, who earlier in the day announced the withdrawal of British indie act Friendly Fires, who had canceled their visit to Australia because of a family emergency affecting one of the band members.