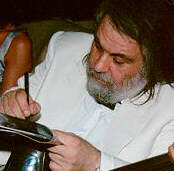 Oscar-winning composer Vangelis has dedicated his most recent composition, to the NASA space mission to Mars, which premiered at the Temple of Zeus in Athens.

The composer, who has had a life-long passion for space, was criticised for risking the safety of the ancient ruins at the Athens temple.

The composer won an Academy Award for the soundtrack to the 1982 film Chariots of Fire.

He wrote the new composition to mark NASA's 2001 Mars Odyssey, which was launched in April in search of water on the Red Planet.

"Science and mythology were the topics which fascinated me since my early childhood." Said Vangelis before the concert.

Pictures of space from Nasa's Jet Propulsion Laboratory provided the backdrop to the show.

Nasa's chief scientist Jim Garvin said: "The saga of Martian exploration continues, now enhanced vividly by the music of Vangelis, which captures part of the spirit."

Those who couldn¹t view the performance live were able to watch it on a big screen at the nearby Panathenian Stadium – the home of the first modern Olympic games.

According to the BBC, the project had been heavily criticised for its $2.8m (£1.9m) budget, funded by the company behind the 2004 Olympics, as well as being accused of being inappropriate.

"It is an improper use of these places … they may be archaeological sites but they are also holy places for our religion," said Panaghiotis Marinis, head of the Greek Society of the Friends of the Ancients.

After the performance, French Education Minister Jack Lang was due to award Vangelis the French Academy's medal of the Legion of Honour.