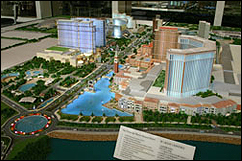 MACAU (CelebrityAccess MediaWire) — Las Vegas Sands Corp. is banking on a major influx of Japanese businesspeople to its new Venetian Macao casino resort, set to open in 2007, making “Asia’s Las Vegas” the ultimate destination choice for conferences and exhibitions due to its proximity to mainland China.

“We see this as being very important in terms of a shop window either to sell to China or to buy from China,” Frank McFadden, COO of Venetian Macao, told the Japan Times.

The Venetian Macao, positioned to be a major attraction on the Cotai Strip, is just a one-hour ferry ride from Hong Kong. To support the project, the government has been improving the transportation network by opening a new international airport, building a new ferry terminal, railway and expressway, and planning a new long bridge over the sea connecting to the mainland and Hong Kong.

As part of an 800,000-square-meter development project on an artificial island, the resort replicates canals of Venice, and features a 15,000-seat even center, a 1,800-seat theater, and a massive spa, hotel, casino, shopping mall and restaurants.

Currently, Japanese account for less than 1 percent of total visitors to Macau, though the number is rising in line with overall growth. Given Las Vegas Sands Corp.’s estimates of 38 million visitors in 2010, McFadden sounds optimistic about Japanese visitors.

Few Japanese are coming to Macau now because there are no direct flights and no reasons for business tourists to come because there are no conferences, exhibitions or big conventions, McFadden said. For tourists on long weekends, Macau airport is already discussing direct flights with two Japanese airlines, “so people can quick come to spend weekends in Macau,” he said.

“Once the products are here, then they feel more comfortable coming.”

McFadden explained the relationship between the two planned casino resorts: “We see the markets as being complementary, because you have a lot of places, a lot of exhibitions, where they don’t go to the same place.” –by CelebrityAccess Staff Writers