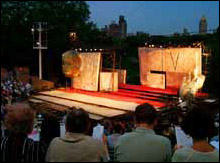 (CelebrityAccess MediaWire) — The Public Theater in association with MTV and VH1 will presents the inaugural season of Joe's Pub in the Park, a two-week series of paid and free concerts at the Delacorte Theater in Central Park, New York. The series kicks off with Bebel
Gilberto on August 16t and continues August 27 and will feature additional performances by Jonathan Brooke, Mos Def, Gavin DeGraw, Joe Jackson, Ute Lemper, Meshell Ndegeocello, Todd Rundgren and Suzanne Vega, among others. All performances are at 7PM. Paid concerts are $40; $35 for Public Theater members; Gavin DeGraw show is $25/$20.

Joe’s Pub, now in its fifth year of providing music at its downtown home, is one of New York City’s most celebrated showcase venues for live music and performance. “The lure of Joe’s Pub is the idiosyncratic programming that is reflective of the fabric of New York and the world." says George C. Wolfe, producer of The Public Theater. "In only five years, it has drawn a really smart, cutting-edge audience to The Public— one that thrives on blurring artistic boundaries.”

“For nearly 50 years, The Public has remained one of the most important cultural institutions to tens of thousands of New Yorker attracting audiences to groundbreaking work downtown and at the Park, said Mara manus, executive director of The Public Theater. "Joe’s Pub is part of that tradition, so we’re thrilled to bring its array of musical performances to The Delacorte, while sharing The Public’s mission with a broader audience.”

“MTV Networks is thrilled to be working in association with the Public Theater to present the inaugural season of Joe’s Pub in the Park,”
commented Judy McGrath, MTV Networks Group president. “The Public’s commitment to producing high quality musical programming of all types,
through a venue such as Joe’s Pub, makes it a perfect fit with MTV, VH1 and our other music-based networks. We’re delighted to be able to offer a significant contribution toward making this concert series available to so many New Yorkers.”

The Delacorte Theater, where The Public Theater presents Shakespeare and other plays outdoors in the summer, will begin its 49th season with Shakespeare's "Much Ado About Nothing" for seven weeks on June 22. –Bob Grossweiner an Jane Cohen

Shortfall In State Payment To Saints Was Predicted

BATON ROUGE (AP) — Few people should have been shocked by the fact that Louisiana was short in its annual payment to the New Orleans Saints, part of a deal to keep the NFL team in Louisiana.

The arrangement made in 2001 was predicated on quite a few assumptions: that tourism dollars in New Orleans would continue to boom, that an interested company would buy the naming rights to the Superdome — a facility the Saints derided as outdated — and that local cash could keep up with an increasing payment schedule.

This isn't even the first time for the problem. The state ran into difficulties making its payment last year and had to be bailed out. Then, several lawmakers predicted the shortages would only grow worse each year.

Nearly a year ago in June, Sen. John Hainkel issued a warning after officials worked out a one-time deal with the company that manages the Superdome to come up with some dollars for the Saints payment. Hainkel knew it was a stopgap measure, postponing routine problems the state would face in keeping its end of the financial deal.

"In everybody's conscience and heart, they know there's going to be a worse problem next year, and we're just putting it off," Hainkel said at the time.

So, the news that the same type of shortfall returned for a second year wasn't unexpected. The only thing that really was shocking was just how large a hole in the $15 million payment there was — almost all of it, nearly $12 million.

And the solution isn't quite as simple the second time around.

Former Gov. Mike Foster made the $186 million deal to keep the Saints in Louisiana through 2010, despite many legislators' complaints that the state had more deserving money needs.

The Saints claimed they needed the boost from the state to keep them competitive with other NFL teams in larger, wealthier markets. Foster argued the team was important to economic development in New Orleans and around the state.

The arrangement raised the payments over time, making it even harder for the state to meet its end of the deal, with annual installments rising to $20 million in 2006 and $23.5 million in 2008.

While the Legislature had to approve parts of the deal, it was pitched as involving almost entirely local dollars generated in the New Orleans area — a hole-ridden premise that had its nay-sayers who worried the state would be left on the hook routinely when the city money came up short.

The shortfall in the payment due July 5 mainly stems from a tourism hit that dropped the New Orleans-area hotel-motel tax revenue. The Sept. 11 attacks and an economic slump have hit travel dollars hard, and projections don't seem to indicate that revenue will rebound to reach the projections assumed in the Saints deal anytime soon.

In addition, the Superdome naming rights have not been sold. They were projected to bring in about $3 million a year.

A new governor now is saddled with the problem of how to pay the Saints, and Gov. Kathleen Blanco is looking at ways to renegotiate the deal.

It was much simpler to cover the last shortfall.

Last year, the state emergency board granted a six-year contract extension to SMG, the private company that operates the Superdome and the New Orleans Arena for the state, in exchange for a $2 million bailout loan of sorts so the state could make its payment to the Saints.

SMG got to keep managing the facilities through 2012 without Louisiana requesting formal bids that would compare the company's rates to similar managing firms. SMG earns the money it loaned the state back over the six years through higher management fees for running the facilities.

The state effectively was over a barrel: agree to the SMG deal or dip into Louisiana's general operating dollars, known as the state general fund.

Lawmakers were adamant at the time about steering clear of general fund cash to fill in the shortfall and keep the state from defaulting on its agreement with the team.

So, the emergency board made the agreement with SMG, officials avoided a huge fight over using general fund dollars and lawmakers didn't have to go home to explain to their constituents that other items had to be cut to keep the Saints in Louisiana.

Though there was some gnashing of teeth, in retrospect that deal seems pretty simple. Renegotiations promise to be much more complicated.

(CelebrityAccess MediaWire) — Montana ExpoPark, an SMG-managed facility in Great Falls, MT and Ticketmaster have entered into a multi-year ticketing agreement for all ExpoPark events. As part of the new agreement, tickets to Montana ExpoPark events will now be available online at Ticketmaster.com and by phone. In addition, tickets to select events will be available through Ticketmaster's latest delivery service, ticketFast(R), enabling patrons to log-on to Ticketmaster.com and download and print their event tickets at the click of a mouse, rather than waiting for the mail or at Will Call.

"We are excited to be the first Montana facility to have Ticketmaster as our ticketing partner," said General Manager Bill Ogg, Montana ExpoPark. "With Ticketmaster's latest technology, the ticketing experience for our local community will be easier and more convenient than ever before."

"Bringing Ticketmaster in will help increase the efficiency of ticketing sales at ExpoPark, easing the load off the box office," said Lori Cox, marketing director for Montana ExpoPark. "With Ticketmaster on board, we can now sell tickets every day of the week through the Internet and by phone."

Larry the Cable Guy, scheduled for June 12 at the Four Seasons Arena at Montana ExpoPark, is the first event being sold by Ticketmaster. Montana State Fair events and Xtreme Freestyle Motocross went on sale, including PRCA Rodeo and Bull Riding, Keith Urban, and ZZ Top.

"Visitors deserve to have the widest and most efficient access to tickets for Montana's premier multipurpose facility," said Nicole Hobby, senior general manager, Rocky Mountain Region, Ticketmaster. "With access to tickets through Ticketmaster.com, visitors no longer need to drive long distances to get great tickets." –Jane Cohen and Bob Grossweiner

"Capitalists should behave like capitalists," Nader said. "They should invest their own money. They should bid for these properties, and if they can't buy them they have to go away and find another place for their projects."

City and state officials have announced plans for a $1.4 billion stadium complex on Manhattan's far West Side that would house the Jets and anchor the city's bid for the 2012 Olympics.

The Jets would spend $800 million in private funds, with the city and state adding $300 million each for a deck over existing rail yards and a retractable roof.

In Brooklyn, developer Bruce Ratner wants to build a Frank Gehry-designed arena for the Nets over the Atlantic Yards rail depot. The $2.6 billion project would include 4,500 new housing units and more than 2 million feet of office space. Details of the plan's financing have not been announced.

Mayor Michael Bloomberg has said that both projects would be good deals for the city, but several City Council members and other local elected officials oppose them.

Nader said that presidential candidates should take positions on local issues like the proposed sports facilities.

"These giant entertainment complexes, once they are built, provide very little economic stimulus compared to the alternative investment that that same money can go into," he said.

The vice president of strategic planning for the Jets, Matthew Higgins, countered that the proposed West Side stadium "will generate millions of dollars a year for public services like schools and health care while creating thousands of jobs in the most environmentally friendly building in the nation."

Nader was joined at a Manhattan news conference by neighborhood activists opposed to the stadium proposals and by George Zoffinger, president of the New Jersey Sports and Exposition Authority, the current landlord of the Jets and the Nets.

Zoffinger said the Jets "went with their hat out to try to get the biggest public subsidy that they could."

HARTFORD (AP) — Ballet, opera, music and other arts in Connecticut have benefited from one of the largest philanthropic gifts in the state. Louise Wheelock Willson, who died last month, left $16 million to numerous artistic enterprises.

The Hartford Courant reports today that Willson, of Simsbury, was the heiress to an Iowa seed-producer.

She bequeathed gifts totaling $25 million, with $16 million dollars for ballet, opera, chamber music, the theater and other arts in Connecticut. Her will lists beneficiaries such as the Hartford Symphony Orchestra, Connecticut Opera and New Britain Museum of American Art.