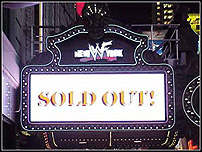 Metropolitan Entertainment has been retained by World Wrestling Entertainment to be the exclusive producer of all music and comedy concerts for WWE's entertainment complex, "The World.'

Located in famed Times Square in New York City, the 48,000 square foot venue can accommodate more than 1,000 guests and features a state-of-the-art soundstage for TV and live entertainment productions. The complex also includes a 500-seat restaurant. The World is located on the site of the legendary Paramount Theatre, which has been restored to its original grandeur with the reconstruction of the famed marquee and arch.

"We're very excited to be working with Metropolitan Entertainment, one of the most recognizable names in the concert and entertainment business. We believe that their credibility and track record will propel The World to new heights as one of the premiere entertainment venues in New York City," said Linda McMahon, CEO of WWE.

According to Mitchell Slater, Chairman of Metropolitan Entertainment, "This is a major step in our strategic growth plan. Our new partnership with WWE serves to enhance our position as the preeminent independent promoter in the Northeast. With three exclusive venues in Manhattan, Metropolitan Entertainment has the ability to develop an act from club level up through the stadium level. We are excited to be working with WWE and look forward to a long and mutually rewarding relationship."

Show kicked off its annual Friday Summer Concert Series on May 3
with Sheryl Crow followed by Train on May 10. Rounding out the rest of the schedule
are:

City Lights Pavilion, Denver's newest amphitheater and located on the parking lot grounds of the Pepsi Center, has sold 30 of its 35 VIP Boxes, priced between $9,500 and $17,000. The boxes come with four seats or eight seats; 25 are eight-seat boxes and 10 four-seat boxes. The start of its inaugural season is set for June 14 with Barry Manilow.

"There has been a lot of corporate interest, and a lot of individual interest as well, from music fans who are looking for a good summertime experience," Brian Kitts, spokesman for Kroenke Sports, told the Rocky Mountain News. "The amenities set them apart. You're buying an entertainment package."

Box owners hold the rights for one or three years and receive numerous perks, including special parking, access to a "wait" staff, and access to a hospitality area before, during and after concerts.

One snafu in City Lights Pavilion's June 14 opening is Paramount Theater owner Randall Ship, who trying to get an ordinance to keep the Pepsi Center from building the 5,500-seat venue. Ship claims it will compete with the Paramount (CelebrityAccess, April 16). On February 25, he submitted a petition, calling for a citywide vote to see if voters actually wanted a 5,500-seat outdoor pavilion downtown. He has 180 days to get about 7,400 signatures to get his measure on the ballot.

launches its 2002 season on June 1 with Kiss, it will have 7,000 reserved seats on the center's lawn, an additional 400 parking spaces, another video screen, even a smoking lounge. All improvements are part of a $3.5 million facelift. The lawn seating has been raised too, to improve sightlines.

"It was time to do something different,'' Don Law, newly named chairman of Clear Channel Entertainment, told the Boston Globe.

With 23 new rows of seats it's believed to be the first time a large amphitheater has cut into its lawn by adding reserved seats.

"We're out front on this one," said Tweeter Center General Manager Bruce Montgomery.

"The new seats give us a chance to support more expensive shows and get bigger artists," said Dave Marsden, Clear Channel vice president and the facility's booker. "We looked at our sales patterns, and we always have sold the reserved seats first, then the lawn tickets slow down. But we're encouraged by the patterns we're seeing now, because the public has gone right into buying the new reserved lawn seats after the other seats sell out."

The new reserved lawn seating, which provides more leg room than pavilion seating, is $40. The Tweeter Center expects to host between 42 and 45 shows this summer. Last year it logged 38.

Newport Folk Festival (August 2-4) has added two stages. In addition to the Fort Stage and the Borders Stage, there will be a Family Stage, with programs designed especially for parents and children, and a Roots Stage, presented with Club Passim in Cambridge and patterned after the Newport Workshops of the 1960s.