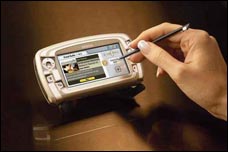 (CelebrityAccess MediaWire) — According to CNET "Visual radio" is coming to the United States–and no, that's not just a newfangled name for a TV set.

Radio giant Infinity Broadcasting is working with Hewlett-Packard to bring a kind of Net-enabled FM radio to U.S. markets, sending information such as album art, concert dates and buy-this-album buttons alongside broadcasts.

The broadcasts will be aimed at a new generation of FM radio-enabled phones, as well as the digital information carried over cellular phone carriers' airwaves, rather than on the one-way FM broadcasts. The companies hope to turn the service into a new advertising and revenue source for traditional radio, which is facing increasing competition from satellite radio and Internet Webcasts.

The so-called visual radio is just one element in a series of strategies traditional radio is turning to in hopes of reinventing itself for the digital era.

Infinity, Clear Channel and other radio stations are beginning to move more of their content online and distribute their content in downloadable podcasts, and they're ultimately moving toward digitizing their over-the-air transmissions.

Once digitized, the radio stations will be able to include browsable data more directly alongside songs, instead of resorting to the phone carrier networks to transmit these services.

The visual radio concept is already operating commercially in Finland, and is being tested in several other markets including England and Germany.

Nokia is expected to sell phones capable of receiving the broadcasts by mid-2006. HP said the service will likely be available at that time, although negotiations still must happen with cell phone carriers in local markets to carry the service.

HP is announcing the plans at the annual National Association of Broadcasters show this week in Los Vegas. The company also said it will be helping Sony Pictures Entertainment create a new digital archive of its works that can be distributed more simply to broadcasters, DVD manufacturers and other content sources.