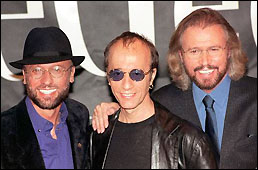 Warner/Chappell Music, Inc. has concluded an exclusive worldwide publishing agreement with music superstar Barry Gibb. As both leading member of the Bee Gees and the co-writer of the group's remarkable body of work, Gibb has been awarded six Grammys, inducted into the Rock & Roll Halls of Fame in both the U.S. and Australia, and been a part of one of the best-selling groups of all time.

Under the agreement, Warner/Chappell will administer the rights to Gibbs' legendary catalog of hit songs dating from 1967 to the present. The company will explore a variety of opportunities for Barry's music, including licensing the material for use in films, television programs and commercials; facilitating publication of printed editions of Barry's music; pursuing new revenue streams arising from the latest music-delivery technologies; and, encouraging other artists to record and perform the material.

Les Bider, chairman and CEO of Warner/Chappell Music, said, "We are honored to welcome Barry and his outstanding

body of work to Warner/Chappell. The remarkable breadth and depth of his music presents us with an array of opportunities related to his catalog as well as his extraordinary new material. With our strong relationships throughout the music and film communities, we are uniquely positioned to assist Barry with the next chapter of his phenomenal career. We look forward to working closely with Barry and putting our vast resources to work in finding new outlets for his music."

"I'm very proud to be joining this incredible organization," said Gibb, "and I look forward to a very exciting and mutually rewarding musical adventure. Great companies are defined by great people and Warner/Chappell is to me that definition. This is a rebirth for me and I am truly inspired by their vote of confidence."

Barry's success as a member of the Bee Gees as well as a solo artist elevates him to rarified company, alongside the industry's most successful songwriters and performers. The Bee Gees are the only group to have written and performed six consecutive No. 1 singles, and the first songwriters ever to have five songs in the top ten simultaneously. The Bee Gees have been honored by the music industry numerous times throughout their career with 16 Grammy nominations, induction into the Songwriters Hall of Fame, and 10 Lifetime Achievement honors from organizations including the World Music Awards, American Music Awards and the Australian Recording Industry.