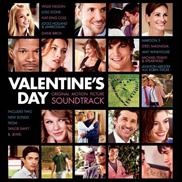 In advance of the soundtrack’s release, fans will have several opportunities to hear new music from both of these artists. Taylor Swift’s new song “Today Was A Fairytale,” which is the end title theme of the movie, is available now at iTunes for purchase. The song skyrocketed to #1 on iTunes hours after its release. In addition, January 31 will bring the world premiere performance of “Today Was A Fairytale” when Swift performs the song at the 52nd Annual Grammy Awards (where she is nominated for eight awards).

The Valentine’s Day soundtrack also includes Jewel’s brand new single, “Stay Here Forever,” which can be heard now on Country radio. Starting on January 27, fans who purchase Valentine’s Day movie tickets through www.fandango.com or www.movietickets.com will get a special free download of the original demo version of the single through iTunes. Jewel will also perform the song on Lopez Tonight and on Live with Regis and Kelly.

Other soundtrack highlights include Maroon 5’s rare take on Frank Sinatra’s “The Way You Look Tonight”; the new Top 25 hit single from CMT’s Can You Duet? season 2 winners Steel Magnolia; Amy Winehouse; Joss Stone; the bird and the bee; and Anju Ramapriyam’s Bollywood version of the classic “Signed Sealed Delivered I’m Yours,” among many others. The full track listing is as follows: –by CelebrityAccess Staff Writers