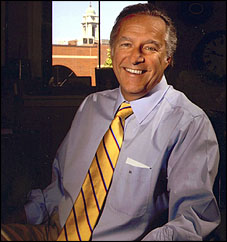 PORTLAND, ME (CelebrityAccess MediaWire) — Three years ago, Jerry Ade decided that he had had enough. He had been working in the entertainment industry for 33 years and already had an impressive list of accomplishments under his belt. For a man at the height of his career, a transition into an entirely different industry may be surprising to some, but Jerry wouldn't have it any other way.

Ade was perhaps best known for his trailblazing work in the world of urban artists. In 1988, Jerry bought out Norby Walters interest in General Talent and leveraged that to found his own agency, Famous Artists. Since then, he has represented some of the biggest artists in the world, performers such as Jay-Z, Beyonce, and The Beastie Boys at critical stages of their careers, he has managed a successful record label and been the recipient of numerous awards representing the approbation of his colleagues.

As the climate in the live touring industry started to shift towards the end of the 1990s however, Jerry started to rethink his strategy. With increased pressure from the internet and illegal music downloading, the corporate consolidation of the radio industry and the trend towards the overexposure of artists helped Jerry to decide that if he was to continue to expand, he would need to find another avenue for his creativity, and that's what he has done.

Today, Jerry is a highly-successful commercial real estate developer in Portland Maine. He had considered his destination carefully, finally choosing Portland over Charleston, South Carolina and Naples, Florida. "I'm just not into hot weather" Ade told CelebrityAccess during an interview.

To Jerry, the city seemed to hold promise, like a yet fully-realized Greenwich Village. Using profits from the sale of divisions of his record label, Jerry acquired 4 City Center, in the heart of downtown Portland and started renovations immediately converting the building into a multi-use structure with commercial spaces and apartments. He didn't stop there, his new firm undertook multiple projects around Portland, including the Grand Trunk Building which is a part of the Roundhouse Complex. Jerry even found himself featured on the billboard of SBSI, the banking institution that he patronizes.

It was Ade's work to get a Methadone clinic built in Portland that really vaulted him into local public awareness. More than a building project, there was a political dimension to the construction of the clinic. Although there was little public opposition to the plan, city officials were less than enthused by the idea of Portland playing home to such a facility. Jerry, not one to give up, persevered and after a successful referendum, the clinic was built.

Its not all building for Jerry now. He's got a number of other business irons on the fire. In addition to the real estate, he also runs a company that manufactures cashmere scarves for colleges and universities and there are even some quiet rumors that he might be making moves in the broadcasting world as well, but as of now, they are no more than that.

When asked if he would ever considering returning to the music business, Jerry replied "You can never say never, but at this point, it seems unlikely. I have no regrets at all. I love the 33 years in the music business but I'm on to new things. I have many good memories of my time in music business but I love what I'm doing now." If anyone would like to reach Jerry and catch up on old times, he's provided his office number and urges you to call. The number is 207-774-1009 – CelebrityAccess Staff Writers