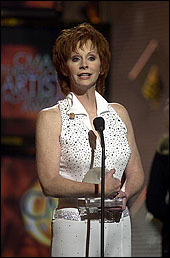 (CelebrityAccess MediaWire) Whirlpool has signed on as the sponsor for Reba McEntire's 2004 concert tour to benefit Habitat for Humanity International. The tour kicks off June 4 in Connecticut, visiting more than two dozen cities across the U.S. to raise awareness and support for Habitat for Humanity.

"It's an honor for Whirlpool to sponsor one of our country's greatest musical artists and supporting Habitat for Humanity at the same time," said David Swift, executive vice president of Whirlpool North America. "We believe that Reba embodies the Whirlpool brand image — as she is a successful career woman, mother, and homemaker and is also committed to various humanitarian causes. Reba's tour provides us with the opportunity to go directly to our consumers, talking to them about Habitat for Humanity in a new way and align ourselves with a terrific performer."

Whirlpool donates a refrigerator and range to every Habitat for Humanity home built in North America and thousands of Whirlpool employees have volunteered their time to local Habitat builds in their hometown communities. Since 1999, Whirlpool has donated approximately 40,000 appliances to Habitat as part of its $25 million commitment to the organization's More than Houses campaign, which will build more than 100,000 new homes by 2005.

"Whirlpool and Habitat for Humanity are both committed to providing safe and affordable homes to communities across the country," Millard Fuller, founder and president of Habitat for Humanity added. "We are thrilled to be joined by Reba McEntire in this effort, as we work to help families in need by inspiring hope and building lives, one home at a time."

Earlier this month Whirlpool Corporation announced it would extend its commitment to Habitat for Humanity into Europe. Habitat for Humanity plans to construct 200 homes in Europe this summer and Whirlpool will provide a range, refrigerator and washer to each one. The employees of Whirlpool Europe will be among the volunteers who build the homes. The first phase of this program will help improve the lives of approximately 1,000 people who currently live in sub-standard housing.–Jane Cohen and Bob Grossweiner