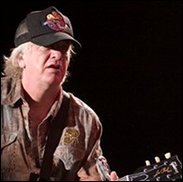 Whitford has has been an integral part of Aerosmith for the past 39 years, played his first Experience Hendrix tour dates in 2008 and was part of the EH line-up for dates played earlier this year.

Like the previously announced Experience Hendrix players, Whitford has a strong affinity for the musical legacy of Jimi Hendrix as well as a very personal connection to it. "I got to see Hendrix play in '68 in Boston Garden with Mitch and Noel Redding and it was like, 'Wow.' I bought a Fender guitar the very next day," he recalls.

Anchoring the tour is Billy Cox, the legendary bassist whose relationship with Jim Hendrix and his music dates back to the early 1960s when the two met while serving in the U.S. Army’s 101st Airborne Division.