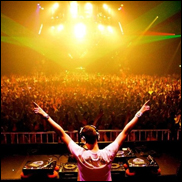 NEW YORK (Hypebot) –As electronic dance music (EDM) continues its reign of prominence in today’s music landscape, some of the scene’s most recognizable names are generating some serious cash. Considering that these DJs are performing on the world’s biggest stages, festival circuits, and even landing on the cover of magazines like Rolling Stone, it’s no surprise that they are among the world’s top bread earners in today’s music/entertainment industry.


According to a list compiled by Forbes, the world’s ten highest-paid DJs raked in $125 million over the past year. That’s more than the payroll of the Los Angeles Lakers. Topping the list was Tiesto with $22 million (and an average nightly gross of $250,000). Coming behind him was Skrillex with $15 million, followed by Swedish House Mafia with roughly $14 million.

While plenty of these top DJs receive their income from various avenues including music sales, endorsements and merchandise, the song remains the same in the sense that the bulk of their income stems from touring. A key difference, however, is that when these guys aren’t bringing along some sort of elaborate stage setup, their stage costs are often relatively minimal – being that all they really need is their laptop(s), a USB stick, and a set of Pioneer CDJs.


So just who is bringing in the most dough (and how much)?

The global EDM industry is now worth an estimated $4 billion a year when recorded music, live and broadcast activity and other spin off products are taken into account. EDM was also the highest growing mainstream genre in the U.S. last year in terms of album sales according to the latest IMS business report.